Here are the little guys with their notebooks in our master bedroom/school room. 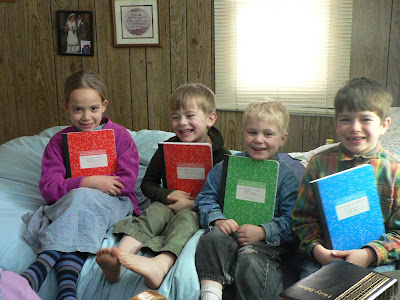 It has been another day of learning as we teach....praise the Lord!

Today, I had to pay our phone bill and renew AAA, so I did speaker phone and had Sammy and Gideon listen in. If they aren't occupied and supervised when I'm on the phone, they usually get into trouble or at least make a mess. So I included them and explained what I was doing beforehand. I showed them my bank card and explained the "address" (account number) and how they all communicated and stuff, whatever seemed to include the needed details.

When I called the phone company, it was all automated, pressing numbers. They loved that. I told them how I was talking to their computer, etc. AAA was a little trickier, as they have a menu system where you can "say or press 1". Background noise, such as little voices, really messes that up. But they were completely silent, very interested, so it was a breeze!

So, rather than having them idle while I was making phone calls, I included them....duh! That is much better. It's like God makes it so that the more you INCLUDE your children in real life, the less they get into trouble AND you teach them at the SAME TIME.

This morning, we did more reading in the book of Joshua, because Joshie is named Joshua. We did a quick review of how Joshua took over when Moses died.

Yesterday, we talked about when God tells Joshua, regarding the laws He gave to Moses, "...turn not from it to the right hand or to the left..." (Josh 1:7) So we talked about right and left hand, and what that expression meant (stay straight on God's marked out path). In their notebooks, we traced their right and left hands and I wrote that part of the verse out for Sammy to trace. 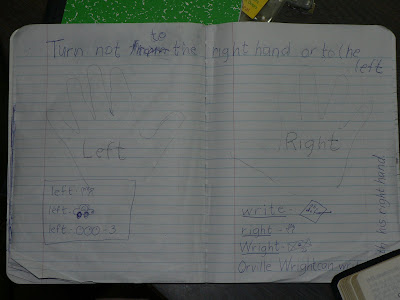 Today, we talked about the next half of that verse, but first, got into right and left versus north and south and east and west. For example, if you tell someone to turn left, it depends on which way they are headed. Kind of a complicated concept. We drew a map of our house (in which our table could be seen, so he could really orient himself!), including Walmart (of course). Then we took that map, drew the compass points, and oriented it on a map of Wisconsin!

(We also talked about words that sound the same but may be spelled different. To illustrate, we made the sentence "Orville Wright can write with his right hand.") 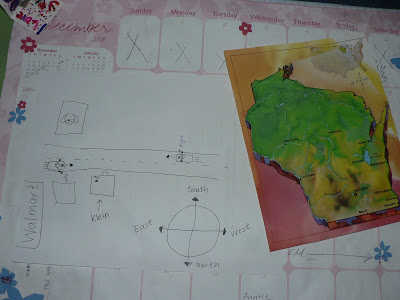 The discerning reader will notice that my map drawing is "upside down". Our house faces south, so its easier to make a map understandable as we sit at the table (which I drew!). However, to make it fit with the Wisconsin map, we had to flip the map. So we did that. So he is learning that right and left isn't always the best way to give directions.

Anyway, he is still soaking it in, and I keep looking for things he can grasp to explain it. He knows, for example, that the sun goes down in the west. He also knows, from our summer of eating supper outside, which side of our property on which the sun sets, which is west. Also, he knows that most people eat with their right hand (if you look at above picture, the drivers are both holding a fork in their RIGHT hands, to illustrate that we drive on the RIGHT side of the road!). Boy, kids can LEARN so much!

So, after that, we talked about the second part of that verse, "...that thou mayest prosper whiterhsoever thou goest" (Joshua 1:7). Combined with "...turn not from it to the right hand or to the left...", it makes a good illustration of a familiar verse, "But seek ye first the kingdom of God, and his righteousness; and all these things shall be added unto you." (Matt 6:33) Joshua's success in the promised land was really a result of him staying true to God's Word! That is so backwards from the world's way of thinking!

It's out of what is in our hearts, not what skills we have, that bring about what we need. What we do and say comes as a result of what is in our hearts. And God tells us what that should be,
"This book of the law shall not depart out of thy mouth; but thou shalt meditate therein day and night, that thou mayest observe to do according to all that is written therein: for then thou shalt make thy way properous, and then thou shalt have good success." (Joshua 1:8, which we got to today)

We have been working with the older kids over the years, trying to get them to take opportunities to teach their siblings as they work with them. Bekah got the bug the other day, and made up this chart for her little brothers. She was waiting for her turn for a bath. She is now copying the Bible in Exodus 17 (and she has started over plenty of times!). She says she found a geneology from Levi to Moses earlier, and her mind just started working.... 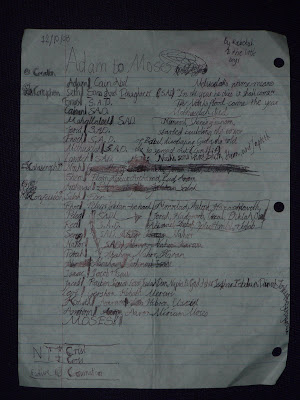 If you click on the picture, you can make out more details. (Her notes in the far left margin are the Seven C's of history which she got from a Buddy Davis song.)

What is so encouraging to us is that she is sometimes one of the kids most likely to get distracted during Bible copy time! Yet, this method is so effective, that she is not mindlessly copying, but getting valuable information.
Posted by Debbie at 10:44 AM

Labels: Bible copy, homeschool, little ones and the Bible