Off to the laundromat 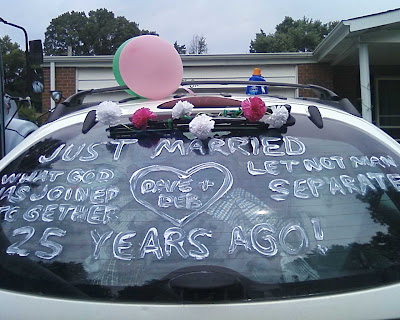 We are having a special date today.... More photos soon!
Posted by Debbie at 3:10 PM 1 comment:

What goes up should come down - epilogue

Today we returned to normalcy after a few days of water restrictions.... 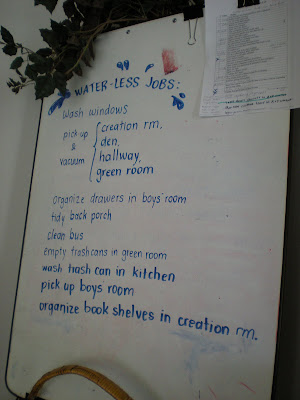 And cleaning up some backups in the basement.... 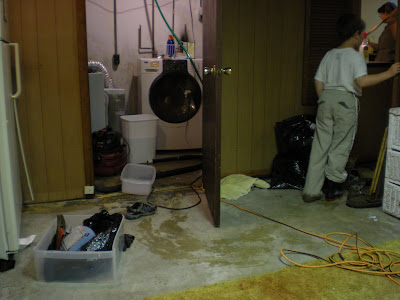 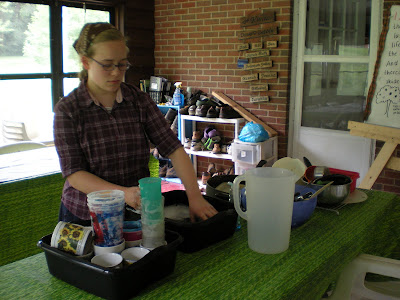 The long-awaited appointment with a plumber and a city inspector arrived! We had eliminated many possibilities and suspected our sewer lateral was busted. So the city inspector had to be there to verify a break or work could not be authorized. As soon as things began, almost the whole family took up stations around the yard to observe. The first attempt to camera the line failed due to a blockage, so the plumber had to get out the big guns.

There was a rumble of moving water. "Do you hear that, guys? It's the sound of victory," the plumber said to the kids gathered with him around the cleanout. He shut off his cable running device.

The city inspector, Sammy, Gideon, Noah and I all listened at the opened sewer manhole in our neighbor's yard. It was unclogged!

A delegation ran inside to turn on all the sinks and flush all the toilets. The mystery was solved.

Last week, the boys had snaked our sewer lateral several times with a 100 foot powered snake, using all the attachments. We thought for sure 100 feet should more than cover the distance from the cleanout to the sewer connection. When that hadn't helped, we were sure it had to be something with the city's side. But, our plumber had a longer snake, and was able to put 130 feet into the lateral until he hit....

Joshy's training pants.
Yes, they were accidentally flushed when they were being rinsed out weeks ago.

So the Lord allowed the least expensive and fastest route for our solution!

What was neat was that we were able to have some interaction with the city inspector. He made the traditional comments about all the children ("Are you mormons?") but began to enjoy the kids and their interest in sewers, etc. He asked about different kinds of "christians", homeschooling, going to Mexico, etc. The finale was when he asked if he could check out the bus. The big kids cringed because we hadn't cleaned it out. We gave him a quick tour, and he said, "I've always wanted one of these."

When we moved in to this house last December, we had to do a bunch of things for our occupancy permit, and the inspector who signed off on it at the time warned us, "When spring comes, your neighbors will complain about the bus, and you'll have to get rid of it." Even though its legal to park in our driveway, it is a little ....how shall we say....unusual.

The man who came today was the supervisor of the man who warned us about the bus.

As he said goodbye, he said, "That's a fine looking bus."
Posted by Debbie at 1:13 PM No comments:

What goes up should go down 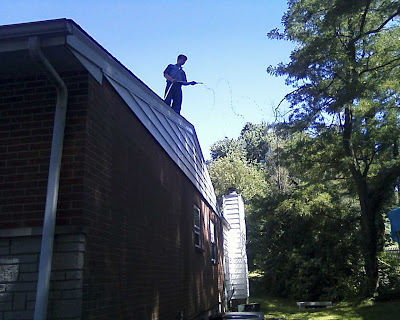 Solomon is a little up in the air as he flushes out the bathroom sewer vent, which we hope will take care of the slow draining in the basement bathroom. We have already snaked to the sewer main outside, as well as through the basement floor drain. This is after waking to find that someone had left the kitchen sink dribbling all night so that the kitchen flooded down to the....gasp....laundry room! Fortunately, it didn't hit carpeting or Daddy's Mac! So we spent the better portion of the morning cleaning up affected areas, topping it off with spilling a gallon jug of cider vinegar. No dice with the vent flushing... Wonder about the sewer lateral.
Posted by Debbie at 8:53 AM 1 comment: