God has a purpose

We have found this article, which was written in September of 2004, to be a much needed challenge.  We hope it will be a blessing to other christian parents, too.  This past summer, we have heard many lament, in effect, "Where are the Timothys?"  Perhaps the answer is not that hard to find.  -- the Kleins

When God says "Teach my words to your children," he has a purpose.

God tells parents many times to teach his Word to their children. God desires that the children know his Word and come to him. The Word of God causes children to know God, to believe him, and to understand what he wants them to do. It tells the children how to follow Jesus.

The Law of God reveals God's righteousness, just as the whole visible Creation of God reveals his power. Without the Law of God, no one could imagine the character of God, because that character is not seen in the physical universe. You could watch the sun, the mountains, and the ocean for thousands of years and never realize that God is full of mercy and truth.  His merciful and truthful character is not declared by the trees, rocks, and rivers, but it is revealed in the Law of God. The Law reveals the qualities of God's character as he acts in righteousness and as he judges sin.  God's judgments against sin teach us that such sinful behavior is unacceptable to the righteous God.

What then will a child receive who diligently studies God's Law? He will obtain the knowledge of God's righteousness. He will thus know who God is, and what God expects him to be. He will also understand why certain behavior is evil: because it opposes the righteousness of God.

All the men whose lives are described in the Bible are examples to us, but especially the example of Jesus. These examples show us what it means to believe God and to be servants of His righteousness. Jesus tells us to follow righteousness, and the way he walked was the perfect expression of righteousness.

Today many people are trying to serve God, but not in the same way that Jesus and Peter and Paul were serving him. Modern methods are very different; they do not depend upon the power of righteousness, but the power of electronics, the power of mass psychology, and the power of medical science. Modern Christians are enlightened by human knowledge rather than by the knowledge of God's righteousness.

For this reason God does not answer their prayers to the same extent. A lowered knowledge of God's righteousness has resulted in a lowered power in prayer. Since God does not answer their prayers as he did in the book of Acts, they must resort to human technology and science. Thus the modern Christians are rapidly departing from the faith of the New Testament, a faith rooted in righteousness and depending wholly upon following righteousness.

The thing that puts power in prayer is the righteousness in the heart of the one who prays. "The effectual fervent prayer of a righteous man availeth much." (James 5:16.) Jesus said the same thing to his disciples: "If ye abide in me, and my words abide in you, ye shall ask what ye will, and it shall be done unto you." (John15:7.) When Jesus speaks of "his words abiding in us", he is speaking of his righteousness abiding in us.

Modern education does not teach righteousness, but teaches all of man's modern discoveries as a substitute for righteousness. Those who place great value on education are those who have lost the power of righteousness, or perhaps never had it to begin with. They do all their works to be seen of men and to receive the accreditation of men. They diligently seek the praise of men because God gives them no praise. Their lives have little righteousness. Jesus said of such men, "How can ye believe, which receive honour one of another, and seek not the honour that cometh from God only?" (John 5:44.)

Jesus and the apostles did not use the world's education or science in order to serve the lost and needy because they had something vastly better. Jesus said, "Verily, verily, I say unto you, He that believeth on me, the works that I do shall he do also; and greater works than these shall he do; because I go unto my Father." (John 14:12.) In order to work such works, we Christians must be full of faith in Jesus, particularly in his words which he left to teach us the ways of righteousness.  Abundant righteousness in the heart will come from meditating upon the Word of God. It will not come from studying the words of proud men who go about to establish their own righteousness through their good works.

In the first place our society has a general craving for fun, enjoyment, and excitement. Children are fed a constant diet of things to awaken and deepen their craving for fun and thrills. This "fun and games" mentality is an unscriptural training which will poison the hunger for true righteousness in the child.

In the second place our society has a craving for success, prosperity, and security. Children are fed a constant diet of ideas which will awaken and deepen their craving for success, prosperity, and security. This "get ahead” and “be successful" mentality is an unscriptural substitute for the true righteousness which is the only true security. "But God said unto him, Thou fool, this night thy soul shall be required of thee: then whose shall those things be, which thou hast provided? So is he that layeth up treasure for himself, and is not rich toward God." (Luke 12: 20-21.)

Spiritual growth will not occur in children if the parents are appealing to the child's flesh. When parents appeal to the flesh, they will get growth of the flesh, nothing else. But when the parents appeal to the spirit, they will get growth of the spirit. The most spiritual thing on earth is the Bible. For this reason God commands the parents to teach the words of the Bible to the children, and teach them without ceasing: while at home, while traveling, in the evening and in the morning. His words should be written upon the doors and posts of the home.

Will this cause the children to hate the truth? No more than speaking constant English to a child would cause him to hate English. In reality, the constant exposure to anything will cause a child to like it more. This is why Australian children like Vegemite.

Timothy was a child who had been taught the Scriptures from his childhood, and it did him great good:  "...from a child thou hast known the holy scriptures, which are able to make thee wise unto salvation through faith which is in Christ Jesus." (2 Tim 3:15.) Little wonder that Timothy was different from other men. Paul testified of him, saying, "But I trust in the Lord Jesus to send Timotheus shortly unto you, that I also may be of good comfort, when I know your state. For I have no man likeminded, who will naturally care for your state. For all seek their own, not the things which are Jesus Christ's. But ye know the proof of him, that, as a son with the father, he hath served with me in the gospel."  (Philippians 2: 19-22.)

When God says "Teach my words to your children," he has a purpose. He wants more Timothys. The word of God will produce them if the parents teach the word diligently to their children. ✞
Posted by Debbie at 4:39 PM No comments: 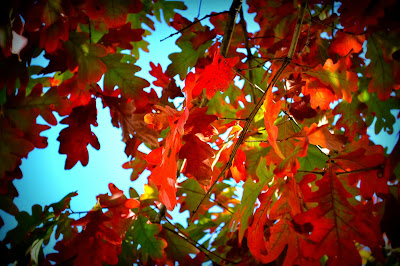 O trees, crowned now in all the fire
The seasons ever grant to you,
Who drop your beauty to the ground,
Enriching all with scarlet hue;

O sun, that dyes the scen'ry gold
With brightest glory ever seen,
A diamond pure, in sapphire set;
In sapphire strong, at peace, serene;

All nature come, join with me now,
O breeze and birds, the trees and sun:
Begin your autumn praise to Him —
Come sing the song that must be sung! 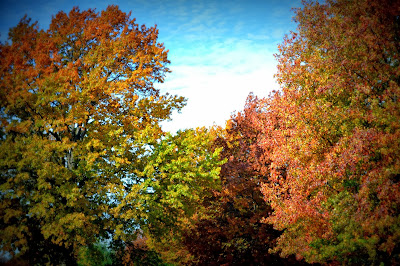 One of the best parts of our summer

We had such a full summer, full of learning and work and meeting people from all over the place!

At first, we were a little wary of west coasters....and also their shoes. 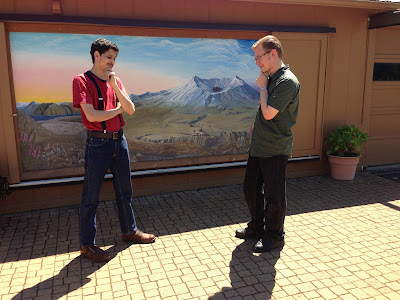 But actually we had lots in common. 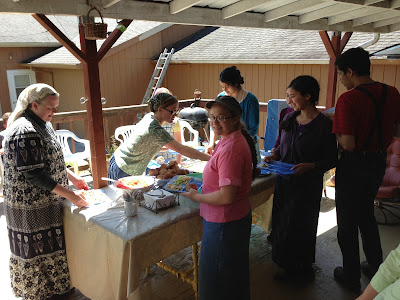 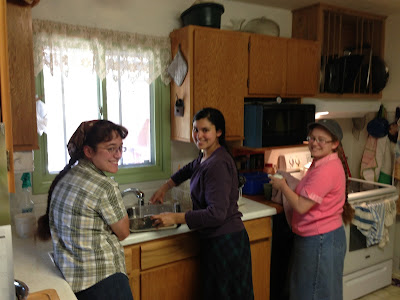 We all wash dishes. 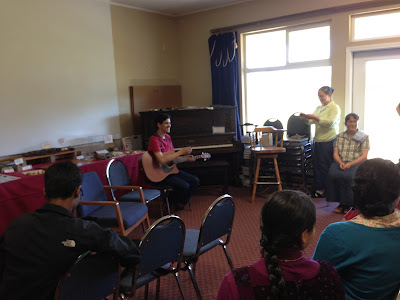 We all love singing about the Lord! 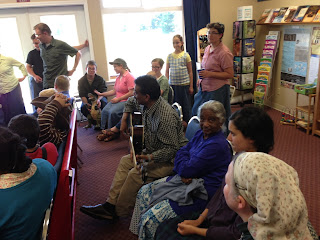 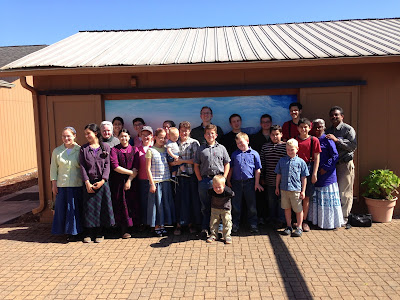 And now we feel just like family....and we are! 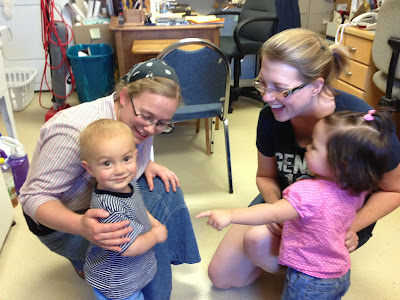 Daniel met the grandbaby of the folks who arranged the first creation science conference our family ever attended...back in Sacramento in the '90s!  But he was unable to get her autograph. 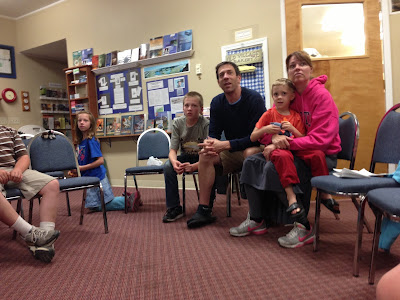 Another sweet family from the land of our ancestral heritage, excited about the Lord, his Word and his wondrous works! 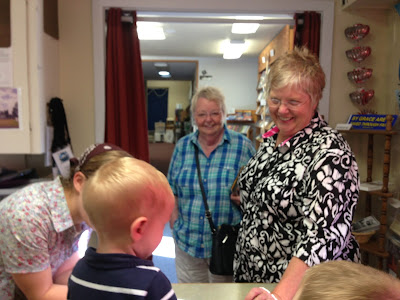 We met these sweet sisters at the local laundromat.  They live in town but had never known much about the 7Wonders Museum until we showed up on their laundry day with 7 full hampers, and 5 full laundry baskets.  It just demanded an explanation. 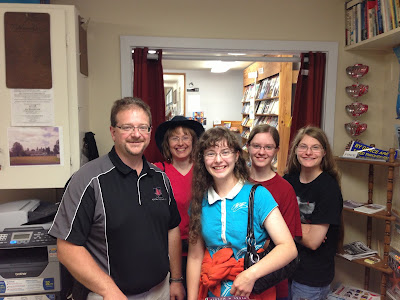 This great Canadian family came for a tour and gladly obliged our requests for them to say "again" again and again!  More power to them! 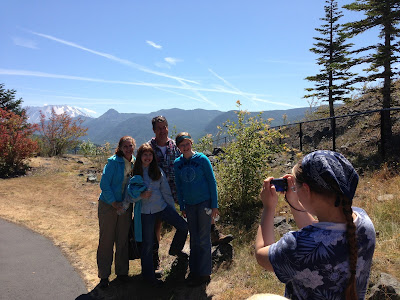 Another family from the pacific northwest, but new to Mount St Helens. 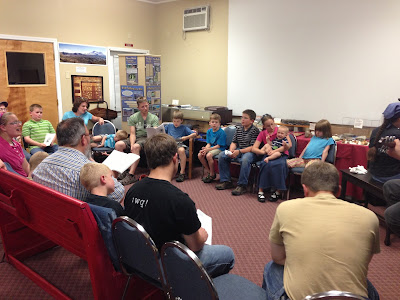 We were happy to meet in person this local, young family who came for a tour and stayed for dinner and devotions. 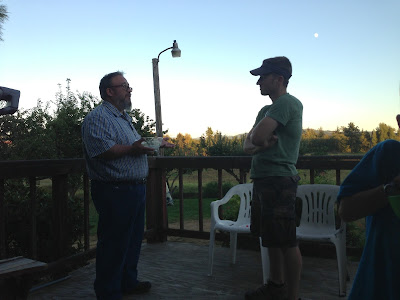 We all found it fantastic to know that even though we live thousands of miles apart, with different circumstances and struggles, the Lord is showing us many of the same things in His Word. 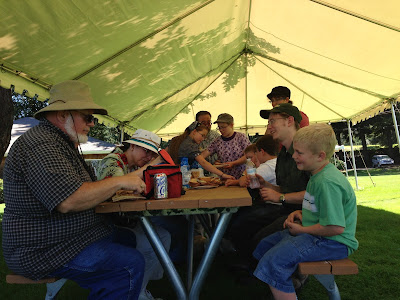 We are thankful for the wonderful blessings the Lord gave us through fellowship with His people who crossed our path this summer!