From a late night discussion at our house

The Apostle Peter was a fisherman. Do you think he ever fell out of a boat? What would his experience teach him about stepping outside of a boat?

And yet, in spite of past experiences, when Jesus called to him, he got up and stepped outside the boat and walked on water.

If God is in the equation, we can never assume our past experiences will define the outcome.

Jesus addressed this after the famous "camel passing through the eye of a needle" discussion. Here was something which common sense, if not experience, would tell us cannot be done.

"With men this is impossible; but with God all things are possible." Matthew 19:26
Posted by Debbie at 8:32 PM No comments:

Orange you glad your thumbs are dry?

If there is one thing we can never have enough of at our house, it's bandaids. But the more we stock up, the more perceived injuries we have! We always try to get the cheapest brand and buy in bulk if that is more economical, and we keep the surplus out of sight. Sometimes they are skin tone, sometimes clear, sometimes made from duck tape! (Bandaid quality is not really an issue for us, because their skin-life is not very long.)

Gideon is trying to kick the thumb sucking habit, and he decided that bandaids were just the trick to keep him alert to NOT sucking them. He puts one on each thumb each morning, and he keeps a stash in his pocket for backup.

Gideon's self-imposed objective is to keep the bandaids dry, which is no easy task. While he is not tempted to suck his thumbs while wearing bandaids, their location on the end of his thumbs makes them very susceptible to moisture from many common daily tasks. And as soon as they get a bit wet, they slip off and are unnoticed until the vacuum roller starts smoking.

A side benefit is we can track Gideon's movement, without the use of GPS, simply from the trail of bandaid wrappers.

One night recently we were at a meeting, and I took Gideon to the bathroom. I noticed he was mounding up the cool, foam hand soap at the sink, way more than is appropriate for a 6 year old. As I prepared to halt him, I noticed he had one bright orange bandaid, angled at about 45 degrees, on each cheek. He truly resembled a native American warrior chief.

My priority shifted from soap stewardship to bandaid stewardship. I quickly removed and disposed of the seemingly squandered bandaids, initiating one of my abbreviated lectures on bandaid budgeting.

Before I could get to point B, Gideon provided me with a helpful bit of unexpected information.

"Those were on my thumbs.
I was trying to keep them dry!"
Posted by Debbie at 4:40 AM 2 comments:

One afternoon while working in the kitchen, Hannah chipped off a bad spud spot. She did a double take before snapping this cute little picture... 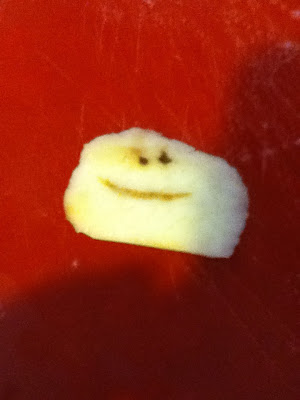