Sleepy little blue eyes, a soft fuzzy head, and occasional little squeaks, welcomed us to grandparenthood (and auntie- and unclehood) on April 11, with the arrival of John Mark Klein, the oldest child of Zak and Beth. The little family (locally known as Kleins Minor) has been doing very well and enjoyed an extended trip west this fall, much to the enjoyment of many of John’s great-grandparents.  We are all are thankful for Zak’s continued work from his home office, and John is always willing to take the keyboard and help his daddy with any tricky code when the need arises.

John was born on his Uncle Daniel's third birthday, inspiring Daniel's cute, but inaccurate and fruitless, exclamation, "But uncles don't sit in [juvenile] carseats!". Daniel is thrilled with everything that John (now eight months old) does, which absolutely delights John, which in turn causes Daniel to erupt in laughter, which John finds totally hilarious, which makes Daniel completely....  well, you know where this is headed.  Daniel's favorite rock stratum is the Cambrian, but he enjoys any fossil he can lay hands on. His commentary keeps his siblings rushing to transcribe, to wit:  “The earth is similar to the moon. Except the moon has no states, and the earth does.”

Aunt Abi (25) was again busy with event planning, traveling, helping with time management, correspondence, hospitality, serving in various creative ways, and encouraging the people in her life.  She has a keen reasoning ability that would have greatly benefited our first bearded dragon, who was fed a seemingly nutritious and delicious firefly.  As the lizard happily accepted the second, Abi's quick research revealed that fireflies were highly toxic, and as expected, he soon expired.  Zak, Abi and Ben conspired with friends to produce a surprise 30th wedding anniversary video for us, which was both touching and hilarious.  It was created with lots of love, an electric broom, figs, a finch protection device, a wild turtle, and a silk tie.


Ben (23) has finally become what he has long aspired to become:  Uncle Ben.  At a spring homeschool conference, he presented on the history of the origins debate, forever putting to rest the notion that he personally knew James Hutton.  In June, he began full time, at-home employment, most of which is performed while walking.  No, he is not a mail carrier.  He is a tech writer and works at a treadmill desk. Ben helped a lot with ground transportation to and from our business conferences, and he and Grandpa Dave  spent a couple of weeks in smokey Oregon, working, visiting friends, sampling Marmite, and awaiting the arrival of the rest of us, as we slowly drove there to meet them for a Bible conference.

Aunt Sarah (22) directed the painting crew for Zak and Beth's first land-based home, which is just a couple of miles away from Auntie and Uncle HQ, and into which they moved in January.  She has recently enjoyed doing a programming project with Zak.  She loves spending time with Nephew, but in a pinch, looking at his photos brings her much joy.  Working on musical projects, reading biographies and histories, collecting books on languages, helping with event planning, theme-decorating for her siblings’ birthdays, and reciting portions of favorite lectures with her siblings has kept her busy.  She has been known to secretly paint large portions of the house to surprise certain family members.  And then act like nothing ever happened.

Uncle Solomon (21) is proving to be a very able uncle. In fact, Solomon is often mistaken for one of his grandfathers.  His year was largely spent behind a viewfinder, which, combined with a lot of time crossing the continent to attend or put on conferences, yielded a great selection of photos.  He helped with video and sound at several events and learned a little about installing ceramic tiles in low light conditions and the importance of staying cool when the air conditioner is off.  He replaced an alternator on our van, and pondered the Kleins Minor’s mysterious engine trouble, while waiting for a tow truck with Zak in their travel trailer. He has filled in on many occasions as emcee at our conferences, and his conversation is rich with adverbs.  Basically.

Aunt Hannah (20) helped to keep various events on track, practiced some violin, and baked the best pizza in town for us on most Friday nights.  To the best of her ability, she helped maintain the tradition of incinerating  the marshmallows on the sweet potatoes, to delight our Thanksgiving guests.  Another high point for Hannah was attending a special conference in Kentucky, where she learned a smattering of things from the subjectivity of radiometric decay rate determinations, to the abundance of 4-bar mechanisms in nature.  The latter was interesting, but it did not aid her in her noble attempts to sufficiently power a knee kicker while installing carpet on the concrete basement stairs.  (Solomon was able to provide the impact. Basically.)

Aunt Joanna (18) enjoyed our opportunity to host a couple of traveling families who were from China, and especially the chance to converse in Mandarin. A favorite memory for her was meeting up with dear friends as both our families converged in Wyoming, which caused a brief population surge in that state.  With Zak's help, Joanna wrote a sweet song in celebration of our anniversary, with which the kids also serenaded us for a surprise.  We knew something was up as soon as they sat us down and handed us a box of Kleenex.  "...14 kids and a grand-baby later.."


Aunt Susanna (16) and Grandma Debbie were blessed to be present for John's arrival.  Susanna loves the privilege of helping the new little family on any needed occasion.  One of her favorite experiences this year was seeing dear friends on Long Island.  Susanna also did some painting projects, directing and executing much of the painting in the girls' downstairs bathroom, after Noah repaired the damage from the mystery leak upstairs.  Unexpectedly, a second mystery leak soon brought down the first repair.  So another sheetrock repair is slated for 2016, Lord willing.

The careful popping off of ceramic wall tiles in the upstairs bathroom was a moment of great satisfaction for Uncle Noah (14), as the second mystery leak which sogged his otherwise meritorious repair job in the basement was squelched. He also replaced sheetrock on the basement stairs, and was an accomplice to Sarah's surprise painting project.  He silenced many a squeaking glider through his careful study of sleep-inducing furniture mechanisms. As we passed through California, Noah relished the opportunity to work on his grandparents’ front door closer.  He fixes stuff almost faster than we can break it.

Uncle Sammy (12) has been a happy traveler, enjoying opportunities to hike volcanic remnants, follow the Erie Canal, explore the Channeled Scablands, walk over the San Andreas fault, gaze across Grand Canyon, and collect a few rocks.  Sammy helped in locating and installing a piece of plumbing that helped squelch another mystery leak, while Noah was otherwise occupied.   He likes studying programming in his spare time, but really enjoys helping with home improvement projects, and conceived the idea of temporarily blocking the entrance to the basement stairs with warning  signs and orange traffic cones.

Uncle Gideon (11) enjoyed our brief, fall visit to Niagara Falls, after years of having only read about it.  His most helpful endeavor in the garden was finding the base of a pernicious vine that is choking out many trees in our backyard. Gideon is just starting to study the Dutch language, and happily informed us that Split Pea Soup is Dutch.  At our first all-Klein gathering at the cozy home of Zak and Beth, he and the younger uncles surprised the newlywed amateur geologists with a homemade song about catastrophic erosion, using a toy watering can to symbolize the destructive power of fast moving water.

Uncle Joshua (7) made the memorable discovery that his parents' dental irrigation device uses the same principles as a pressure washer.  He also found a method to eradicate the garlic mustard taking over our lawn, using a small lawn aerator like a noodle lifter.  Meteor showers and fossil finding expeditions have been a source of excitement on our travels, but several toothbrushes were lost along the way. Inadvertently, we selected flashing toothbrushes for replacements, initiating  a brief period of confusion caused by an apparent procedural shift to having the boys brush their teeth in the dark.

Along a hiking trail outside Austin, Texas, we came to a flat expanse of rock decked with potholes.  We followed the gently sloping surface downhill, stopping where a wide, shallow, silent river began to cover it.   Soon we saw that the water passed over a maze of submerged curved grooves in the rock.  Thinking this was the “lower falls” at end of the trail, we stopped to take pictures, play at the water's edge, and throw rocks.  Time passed, camera batteries waned, and our appetites increased.

But after further exploration, following the river further, we found the true end of the trail, where the river spilled over a massive ledge of limestone, forming a broad, beautiful waterfall which plunged into a deep pool, encompassed by trees still bearing the bronze color that can persist in December in Texas. It was more than we expected, and we had almost missed it.

Love is such a common concept, and we all love it.  But in our normal experience, love is sometimes frail, sometimes conditional, sometimes just a shell of what we, somehow, know it really should be. Why? The only way we can even be conscious of such a thing as love is that a God who is love made us in His image.  And further, He demonstrated love. “But God commendeth His love toward us, in that, while we were yet sinners, Christ died for us.” (Romans 5:8) The consequences of sin surround us, but God’s mercy and forgiveness are extended to those who call on Him, because God is love. 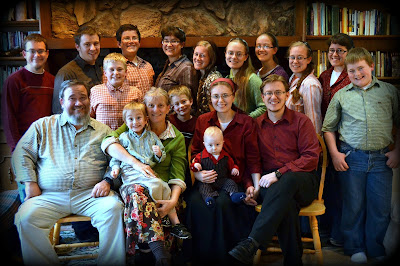 With love, the Kleins