We arrived in Rhinelander, Wisconsin, in the wee hours of July 5th, and stopped at this lovely little brown house where we would stay for the next week. It was owned by one of the families in the church, and they very graciously opened it to us during our stay.

Considering that this time was a huge, weeklong festival in Rhinelander, with every hotel/motel room in town filled, we were humbled and blessed to see the Lord provide free and wonderful lodging for us right in town, through these local saints.

After a good night’s rest in the guest house we spent the day settling for the coming week. Part of that included a trip to the thrift store, as we discovered that one of these young men left their clothes duffel on the kitchen floor back in St. Louis. 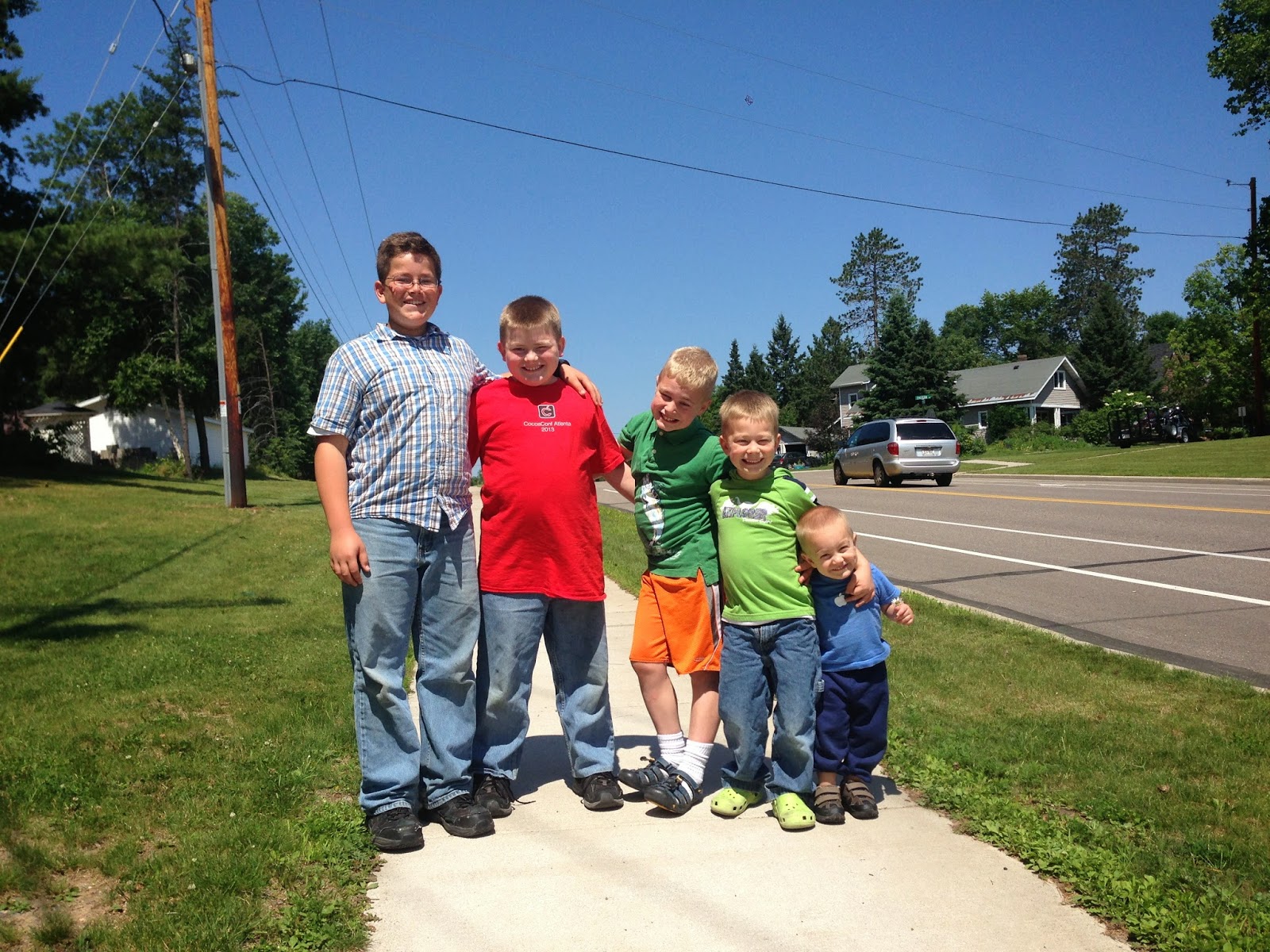 Thankfully his wedding outfit made it safely!

On Sunday the 6th, we met with the congregation at the church where the wedding would be held, and had a wonderful time catching up with old friends, and getting to meet new ones. Nearly all the Bales came down from Ironwood, MI (2 hours away) to be at church as well. After the meetings were over, we and the Bales prepared to head up to Ironwood, Michigan, where the Bale family is from. It was a beautiful day up north and we had planned to spend the day at Lake Superior — which, we learned, the locals simply call the Lake.

After mixing up Kleins, Bales, and Bîlcs in the bus, van, and truck (to make use of the two hour trip with much anticipated visiting!), we hit the road.

After the group arrived in Ironwood, we met up with the remaining Bales at the house, and began to pack up lunch in the bus. It was gray and drizzling that morning in Ironwood, but by the time we arrived, the sun was coming out.

Once all was ready to go, all the crew piled into the bus - the Kleins; Zak and Beth; Mr. and Mrs. Bale, Hanna, Samuel, David and Nate; Esther (Bale) Bîlc and her husband Andrei (from Romania); and Josh Bale (Beth's younger brother, from New York City) with his wife Jen, and baby daughter Ariella. The Bales’ oldest son Ben (based in California) joined us at the Lake later on. We missed Beth's sister Ruth and her husband Aaron, who live in Rhinelander.

The bus is big, but with 27 people we didn’t quite fit in the front bus cabin, so the horde of boys cheerfully resigned to sitting in the back of the bus, on top of the collective ice chests and boxes of lunch. They kept the 1/2 hour jaunt to the Lake quite merry with their squeals and shouts filling the cabin as they bumped up and down in the back. 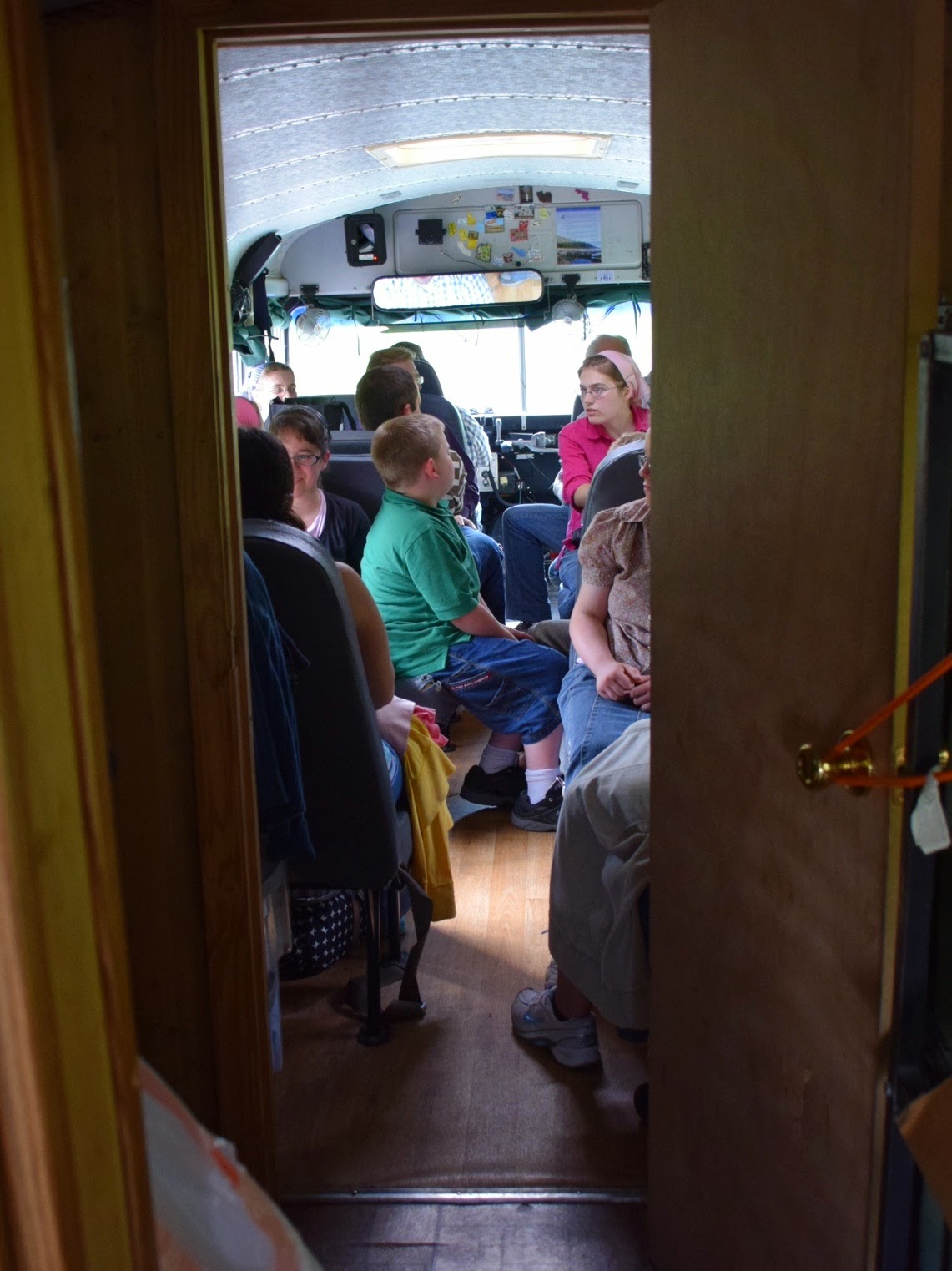 Sadly I have no better picture of the front, as the boys had the cameras in the back. 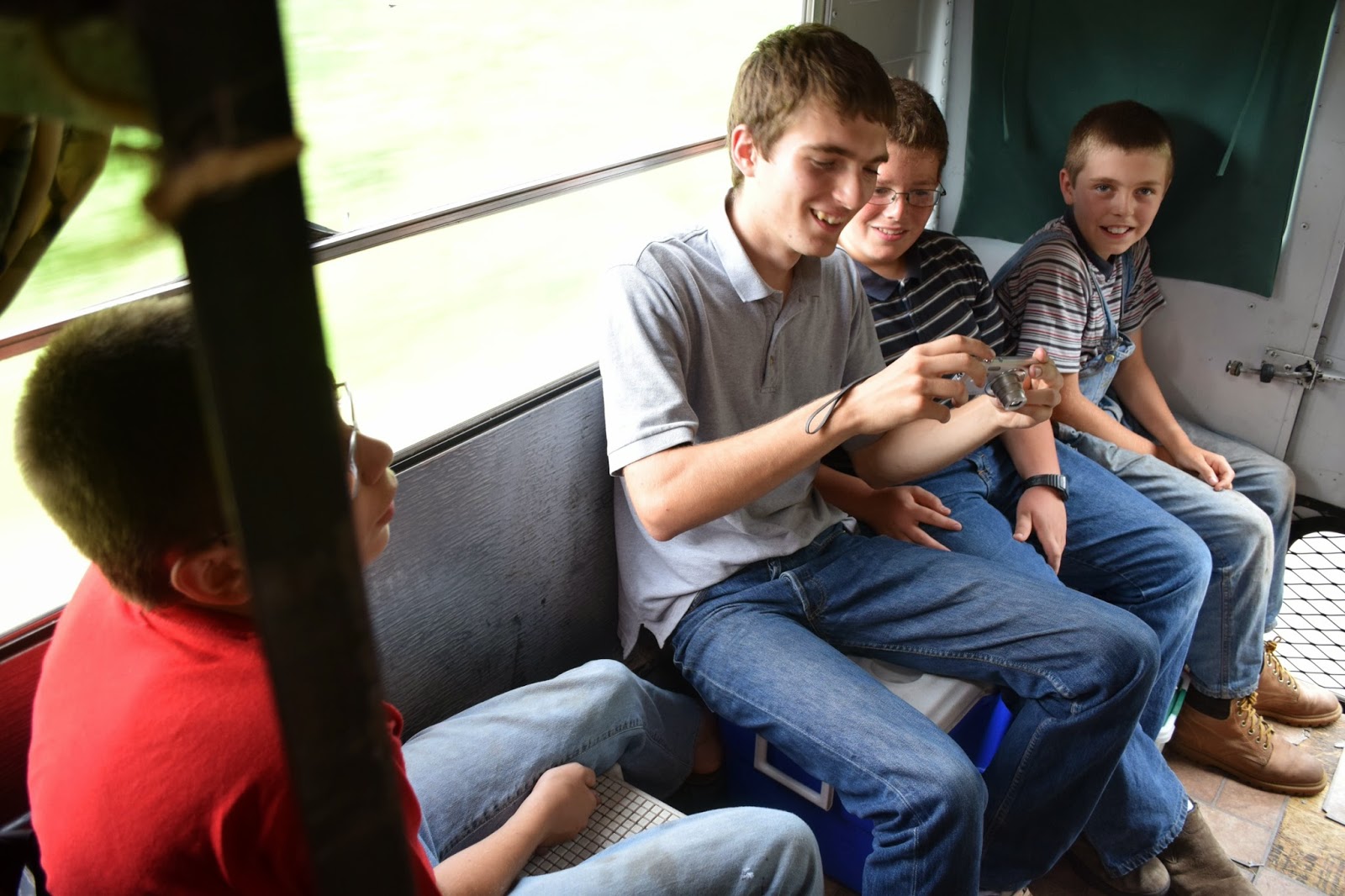 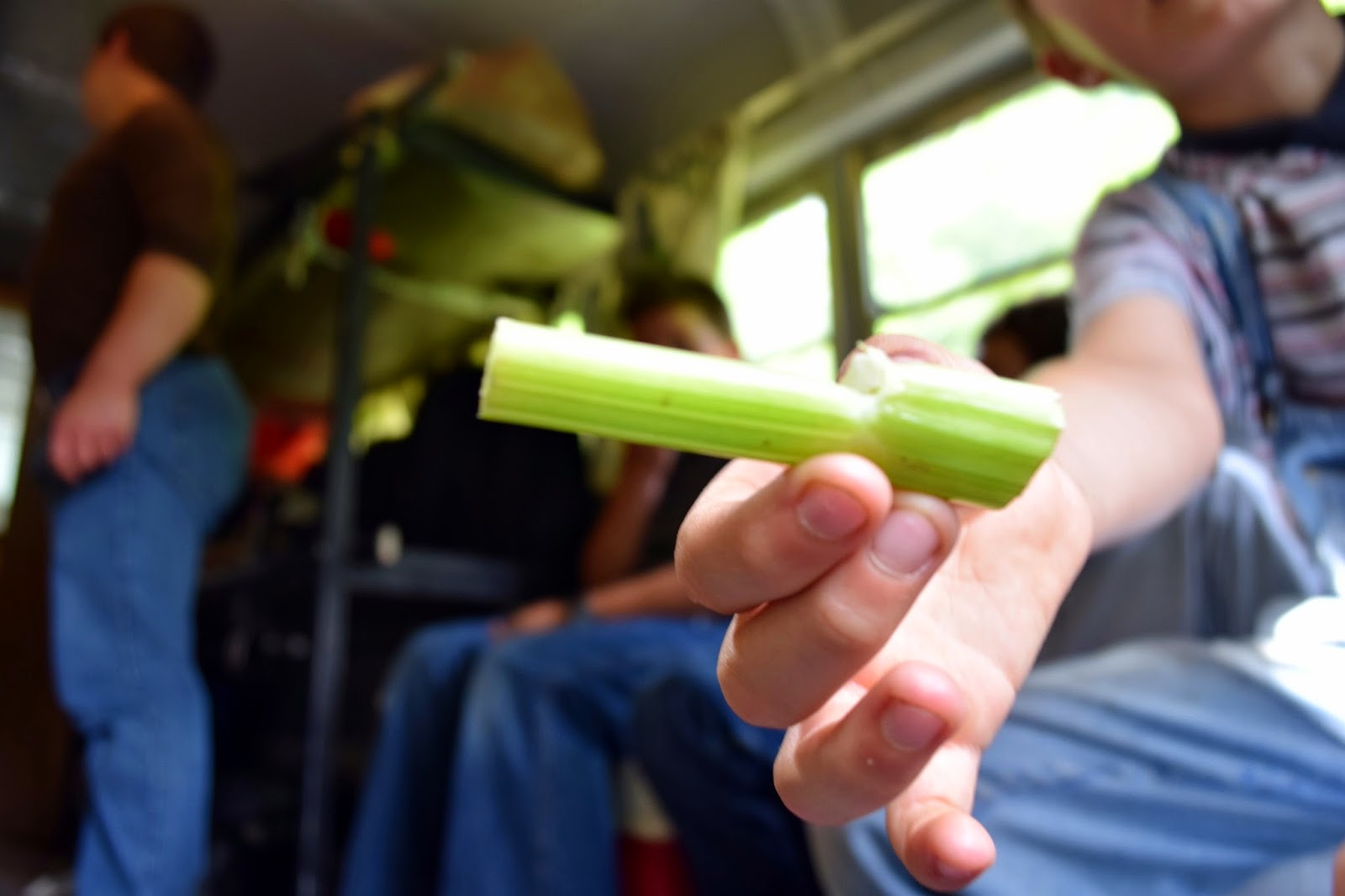 But all the same, it was a tightly packed and happy bunch of people in the front! 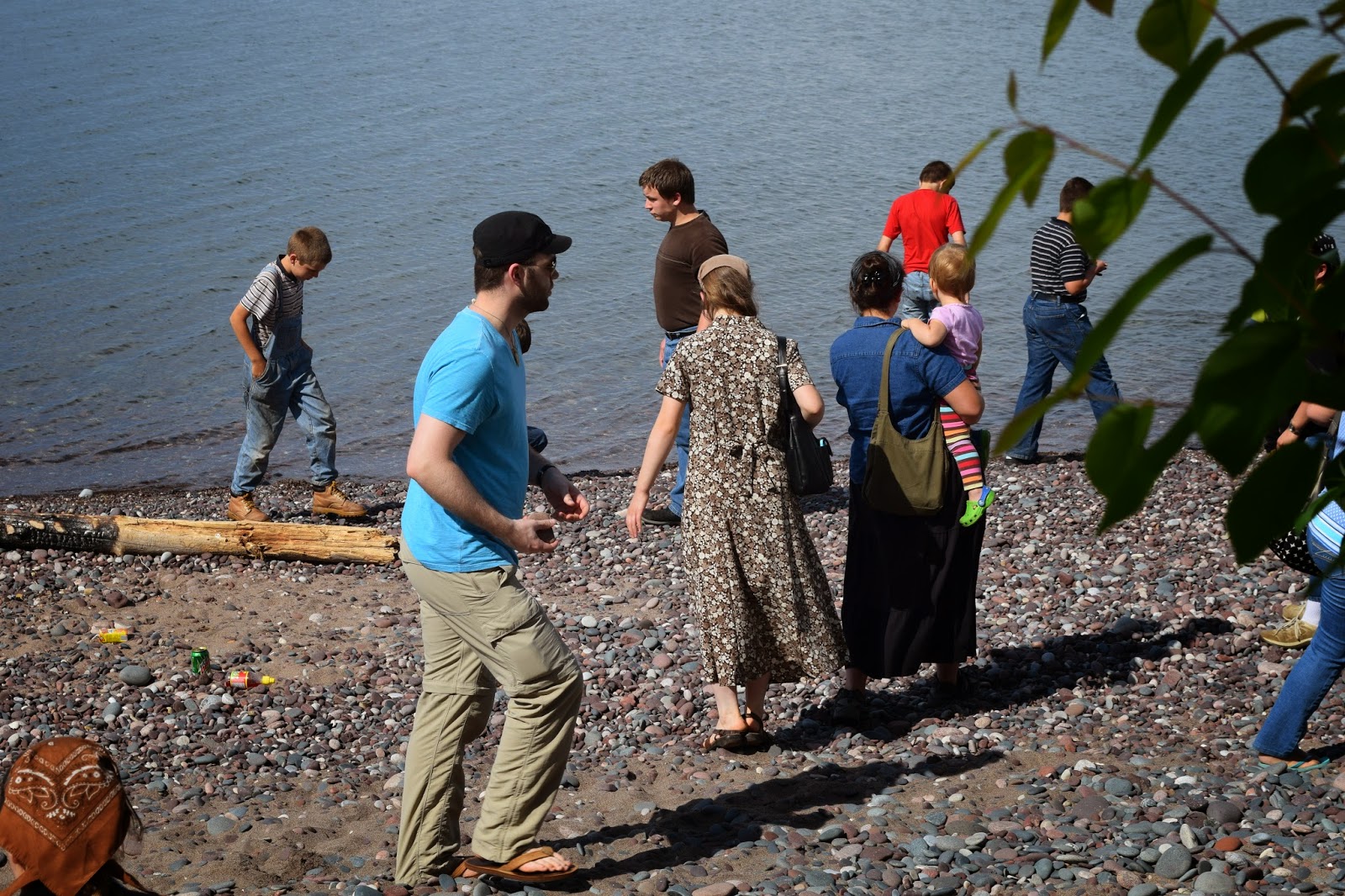 By the time we arrived at the Lake, it was 4 o'clock, and lunch began to get underway in earnest. The boys prepared a fire pit to roast hot dogs, while the girls prepared the remainder of the meal. 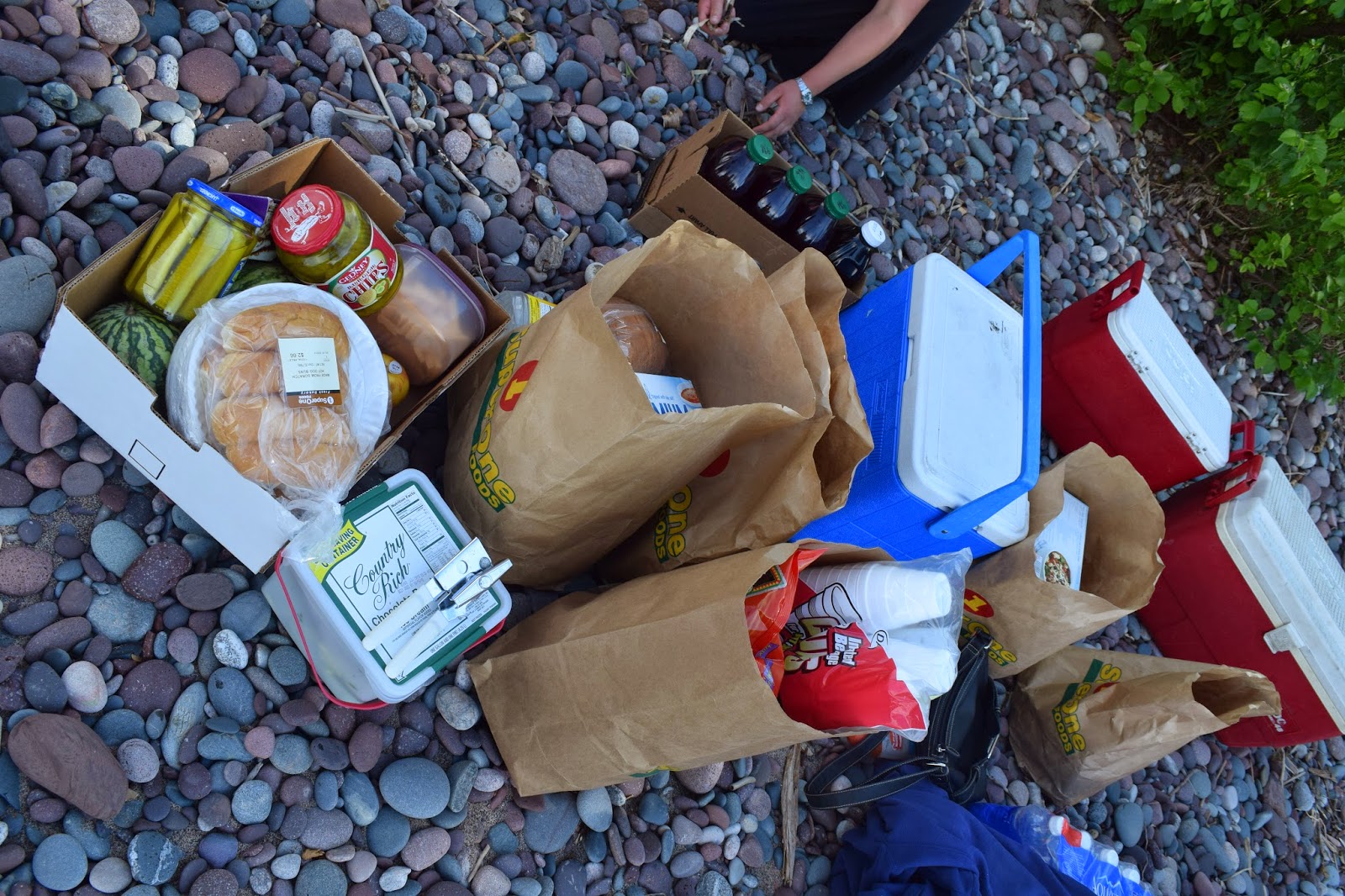 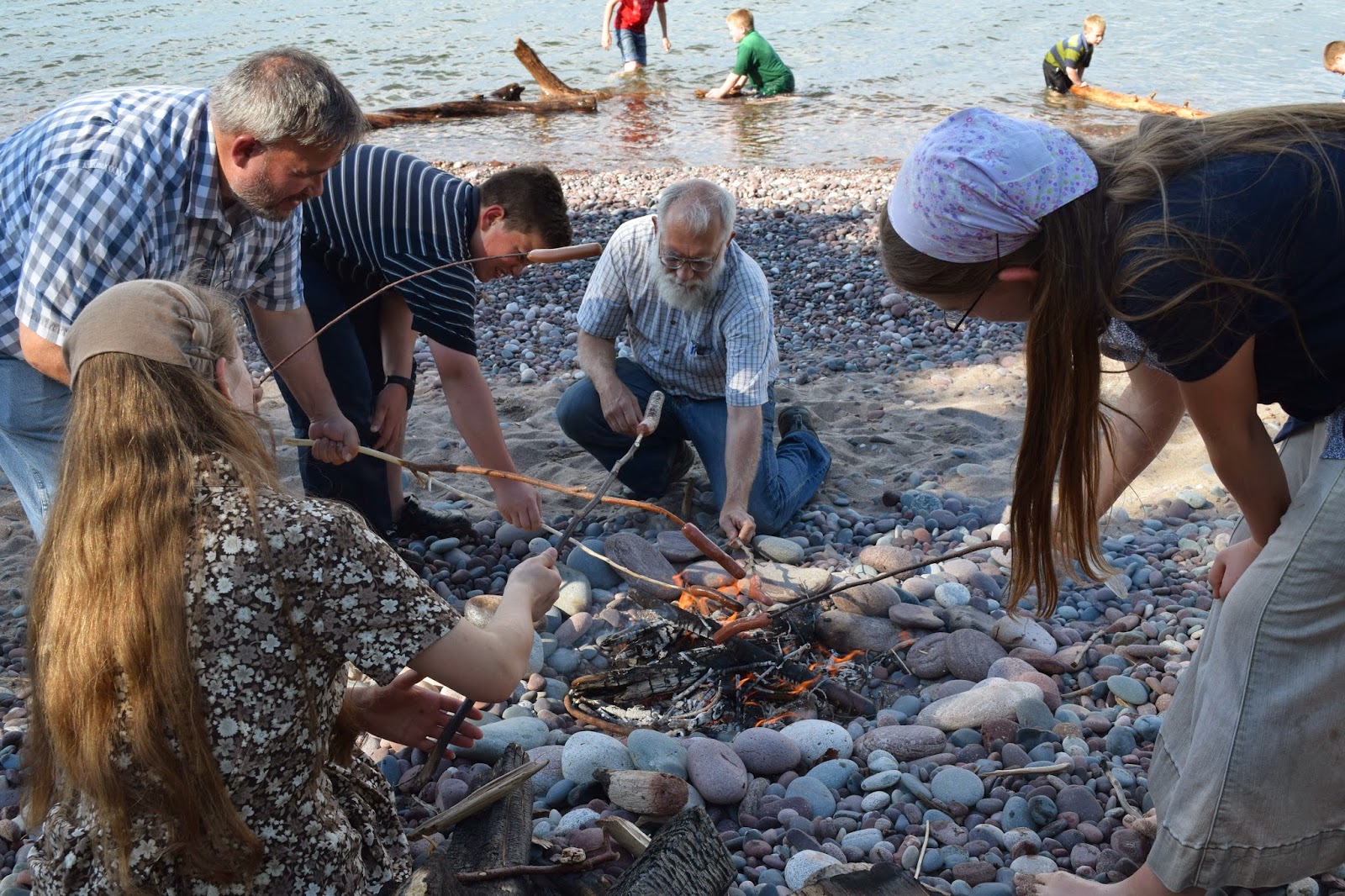 The afternoon was full of much fun and fellowship, with lovely warm temperatures, not-too-cold water, and sweet family. We took advantage of it all!

Now this is not just a sweet picture of the to-be-weds, but it has a special meaning for our family - it showed us how much Zak was in love. 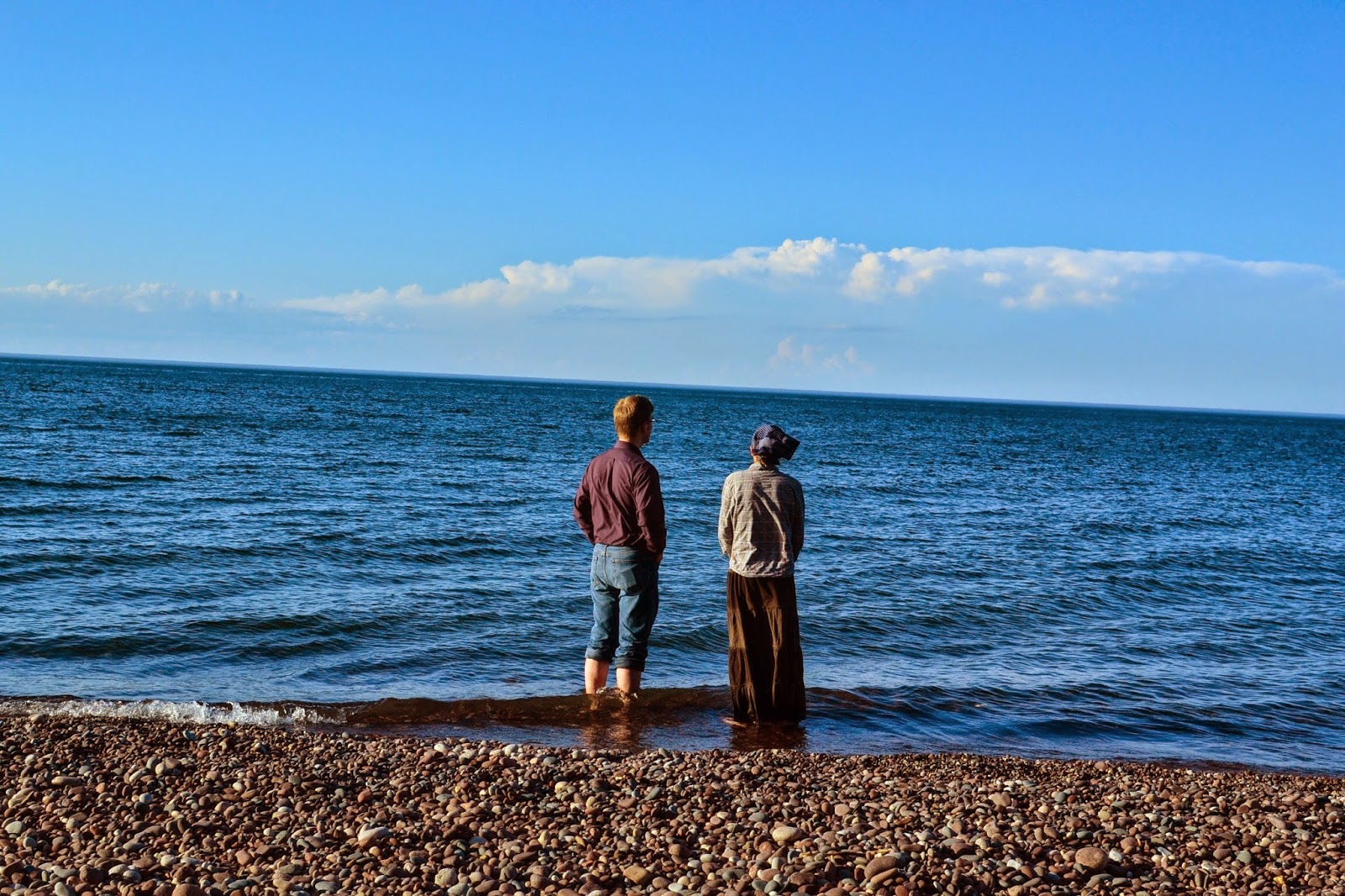 Fast forward to a week from this day: We were visiting with folks from the Rhinelander church, and we told them about this incident. Dad told them,

“Zak and Beth decided to wade on the shore of the Lake - and Zak actually took off his shoes and socks. He never does that. He doesn’t want us to know he has feet. We haven’t seen his bare feet in 20 years. But we saw them that day.”

In response to this, a wise brother in the group observed,

“Well, I guess you can say that Beth just knocked his socks off.” 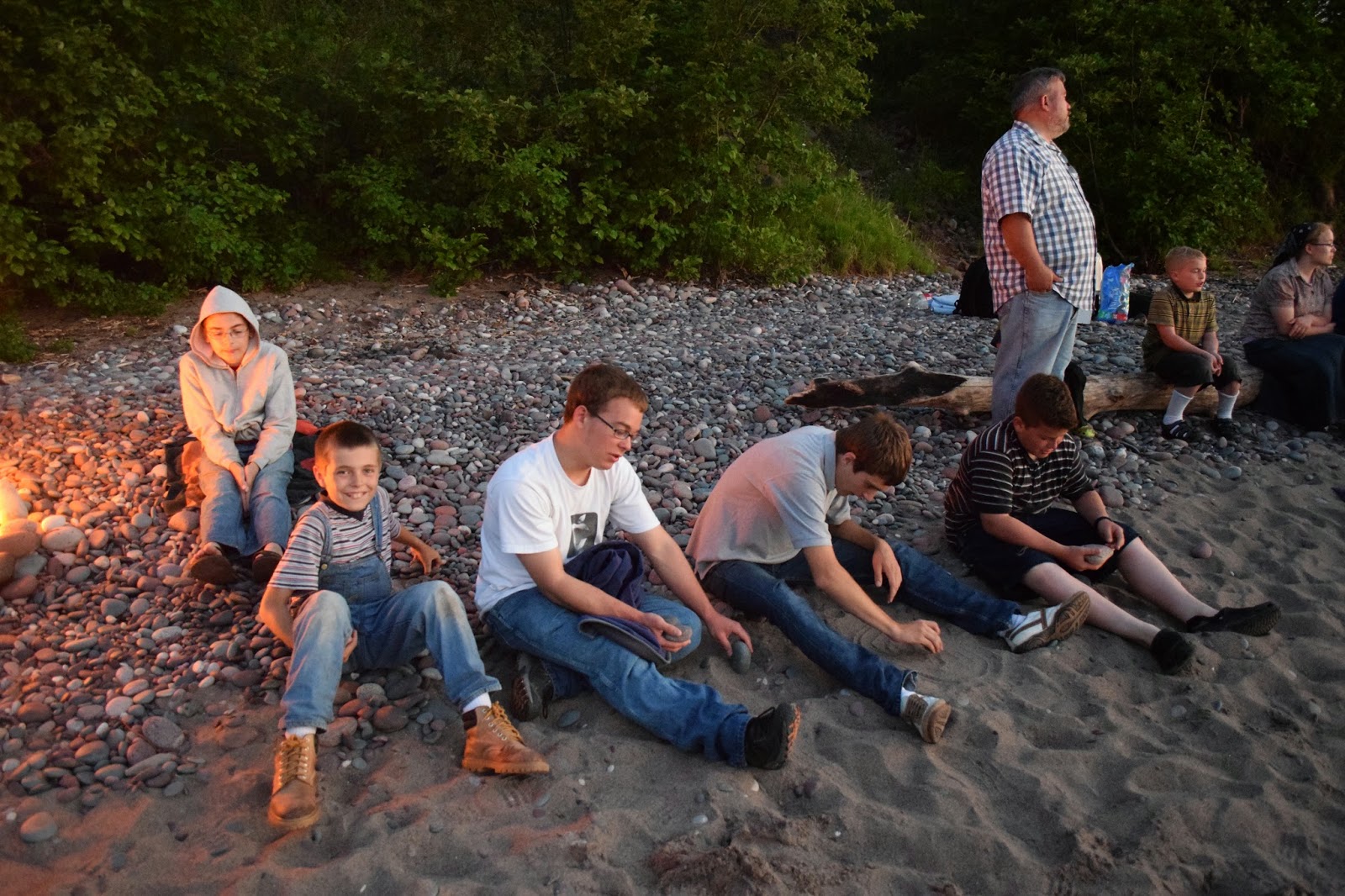 As it got closer to 9 pm, we gathered together to dry out and have song time. Singing runs deep in both our families - it wouldn’t be a complete get-together without song time. :) 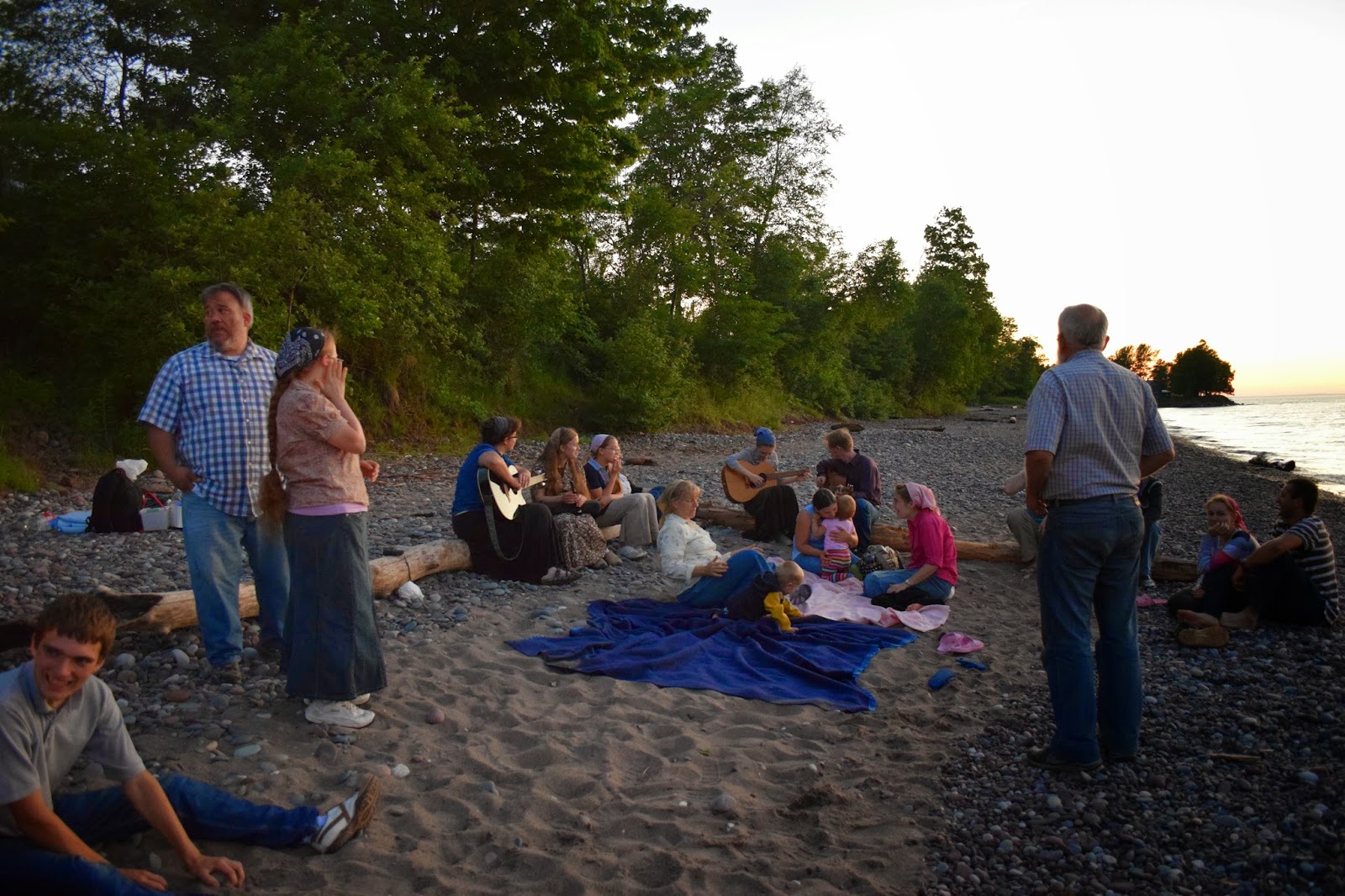 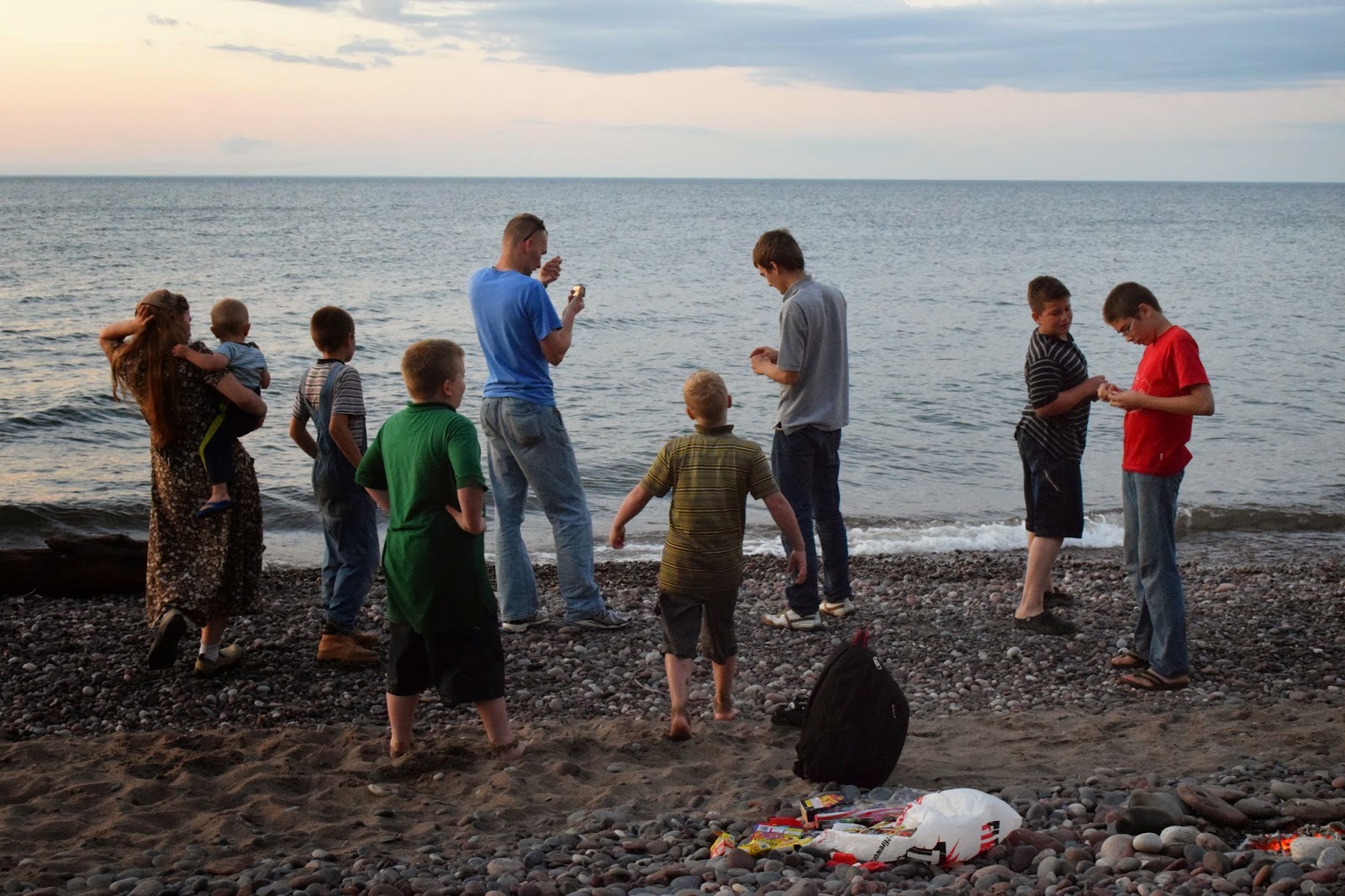 And we capped it all off with fireworks! 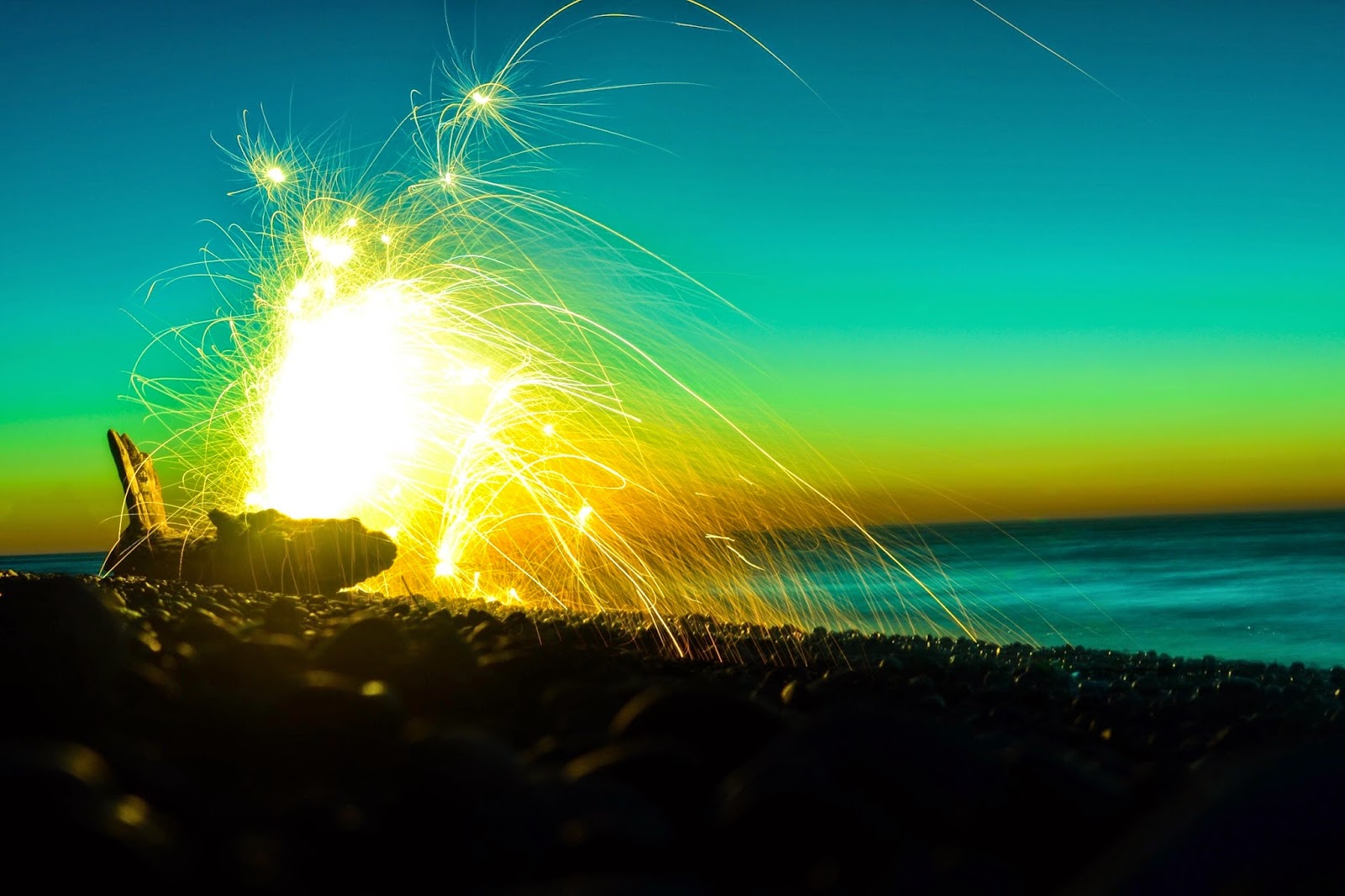 And so began our first week in Rhinelander! There was much preparations to be done, errands to be run, and so many details to be ironed out - but before it all began, the Lord made it possible for all of us to gather together at the beautiful Lake, just to relax, spend time with each other, and enjoy His creation. We left with thankful hearts, excited to see what God would do in the days ahead.

Unto him that is able to do exceeding abundantly above all that we ask or think,
according to the power that worketh in us,
Unto him be glory in the church by Christ Jesus throughout all ages,
world without end.
Amen.

When are we getting part two?