Of Snow, Trucks, and Volcanoes

Hello. This is Hannah writing.

We are at CocoaConf. In Portland, Oregon. Surrounded by volcanic mountains that are capable of erupting and burying us and our conference in lava.

In which case, people will come and excavate us like at Pompeii.

And this is Abi. I offered to help Hannah as need be with giving you the wild and wooly details of our 2,000 mile trip from St. Louis, Missouri, to Portland, Oregon, with 16 Kleins and 2 vehicles. 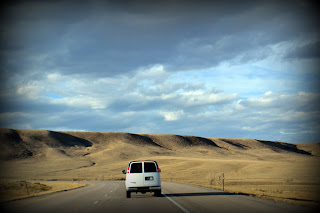 On Sunday the 21st, we set sail in our two vehicle caravan, toward the land of the setting sun. (And the aforementioned volcanoes.) I should mention that Hannah's "volcanoes" were very innocent in nature and that their status as volcanos was a bit doubtful.  Our trip was mostly uneventful for the first three days, with only few and minor tests of the endurance of our brotherly (and sisterly) love, and not much by way of vehicle trouble. 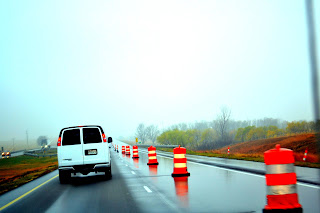 In fact, except for one of Zak's brake lights going out, there was no vehicle trouble at all. Zak drove his pickup, and each day a different group of siblings would accompany him, to visit and help him stay awake. It was beautiful weather most of the time, and we enjoyed seeing the diverse terrain as we traveled. 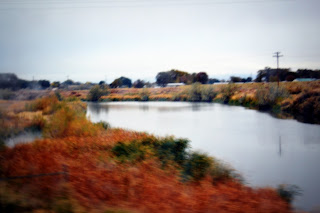 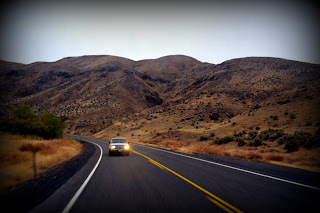 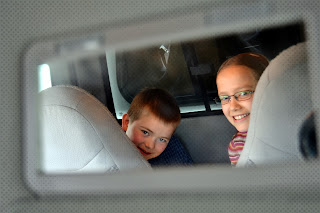 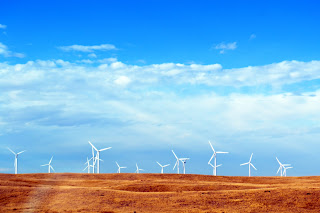 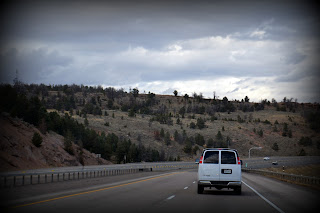 Once we got to Ontario, Oregon, we took a little detour and headed towards Bend, Oregon, to visit some friends out there. Along the way, we drove through a snow storm, which brought with it the customary tests of a driver's skill and expertise.

It was an interesting experience, driving through dry and windy areas to suddenly be in a snow storm, and then to just as suddenly drive out of it, and be back with fall leaves. 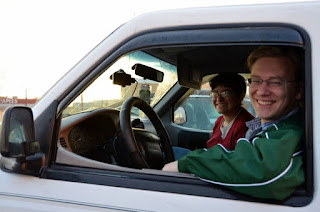 As we climbed higher, the clouds enveloped us at times, and then would clear.  After over an hour, we were in the midst of a slushy snowfall.  The road was yet unplowed, so we were slow and careful.

On a gentle curve in the road, Daddy noticed an abandoned vehicle in the ditch.  After passing, he glanced in the rear view mirror for further details on the vehicle, and noticed a second vehicle heading for a new spot in the ditch.

Zak's truck slid on the road, crossed the empty, oncoming lane, and slid effortlessly into a position slightly bridging the ditch, against the side of one of the aforementioned volcanoes.  Thank the Lord, no one was hurt at all, but the truck was quite stuck, and it looked as though it might have been rendered undriveable by its rather undesirable parking place.  The rear axle looked very odd. 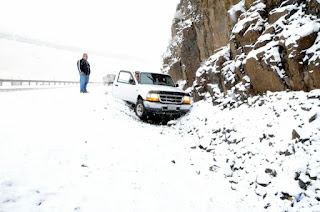 As the little boy passengers in the truck, Giddy and Joshie, said, "It was very smooth."
Joshie agreed that it was almost like sledding, excepting the fact that "you are not supposed to sled into the mountains."

Looking back on this we see many ways the Lord protected us. One of the first being, the moment Zak swerved, Dad just "happened" to look out his rear view mirror.  So, Dad saw the whole thing take place.

If Dad had not seen this happen, we possibly could have gone for a mile or so before realizing Zak, and his companions at the time, were not still with us.   And then, calling would not have helped, since there was no cell coverage. 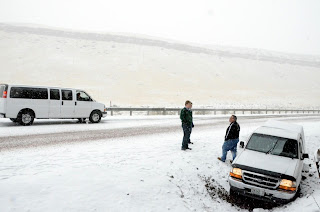 We pulled the van over and began assessing the situation. Our truck was on one side, and our rental van was on the other side of the two lane road.

A semi truck soon came by, and the driver tried to stop to see if he could help.  As he tried to stop, he joined the fun, and began to jackknife.  Fortunately, he did stop before anything dangerous happened, but he was also, in a word, stuck.  He then tried to pull forward, but his tires just spun, all 16 of them.

So we had a truck on one side, and a van on the other side, and a truck close to the middle of, the not terribly wide road. (Oh and I forgot to mention the other truck that had slid off the road a few hundred feet down the road. We were having a little party out there.) 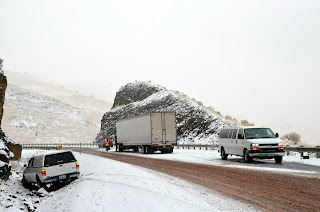 In this photo, we have been on the road long enough that the plow came by and dumped sand and gravel.

This whole time, the snow was falling thick and beautiful, which normally is a favorite meteorological occurrence for the Kleins, but at that time, slightly inconvenient.

So Solomon and Zak took up locations at each end of the congestion and began directing the traffic through the cluttered, as well as not terribly wide, road. 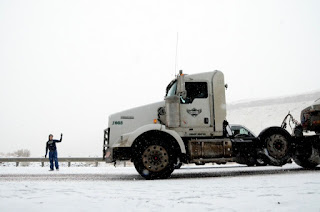 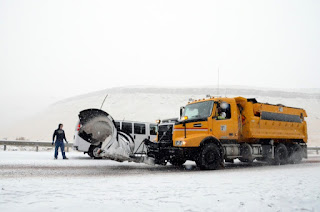 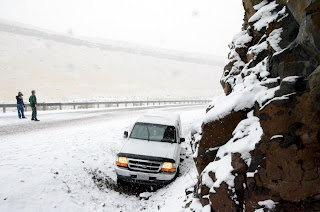 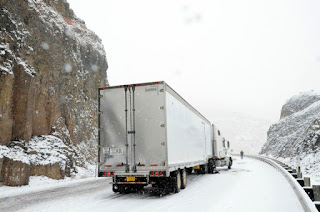 The now-stranded truck driver began putting on his chains and told us there was no reception for miles.  We were beginning to get concerned to making it to the Cocoaconf in Portland and began re-routing our trip and calculating how much time we had to backtrack.    We realized we needed to get a tow truck and possibly a new vehicle (rental) for Zak to drive with all our equipment.  We wondered where we could find another rental vehicle...

We left Zak and Solomon at the scene, and Daddy and the rest of us drove in the van towards the nearest town with services.  Before driving too far, Mom got a signal and called 911 and we ordered a truck.  That done, we carefully turned around and headed back to the scene, to add to the clutter on the not terribly wide road.

Praise the Lord, we were able to call 911 and get a tow truck on the way. 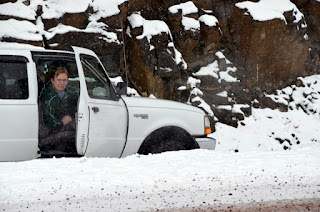 Presently, a state trooper came by to see who was stuck, (and to join the party).  After doing some official things,  he lent Solomon his bright neon orange vest, since he was directing the traffic. Zak and Ben also continued directing traffic (and making photos) until the tow truck came. 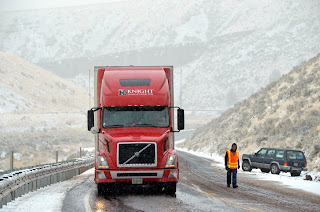 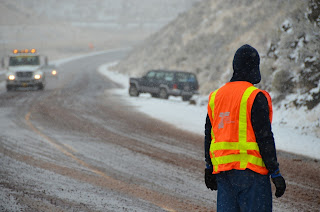 In the van, everyone stayed warm and amused themselves watching the snow fall and the boys direct traffic. Also, watching eagerly for the tow truck to come! 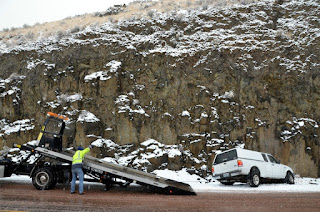 The tow truck came at long last, and pulled the by now chilled and frozen truck out of the snow, and away from the side of the aforementioned volcano. (and by now hopefully you know this volcano was very innocent in nature). It was very cold by now, sitting in the snow all this time. To our great relief, the rear axle appeared normal and there was not a scratch on the body, plus the tires were all fine!  However, state law in Oregon required that the tow driver tow the truck back to their shop.

With our change of plans (skipping Bend), it turned out to be the direction we needed to go anyway.

So we were very thankful for God's protection. :)

Indeed we were! Had the truck's axle been damaged as it appeared, our plans for getting to Portland would have been seriously altered, with driving back to Boise, Idaho (over 200 miles back) to rent another vehicle, possibly scrapping Zak's truck, and making it to Portland at midnight. We had to be there that evening - the conference started the next morning at 8:30!  Needless to say there was much rejoicing in both vehicles as we headed, safe and sound, to Portland.

After that little excursion, we resumed our uneventful trip (L.O.L.) and got to Portland that night around 9:30.

Then we all went to sleep, except for some of us, including yours truly, who stayed up till past midnight setting up for the conference.

Right now we are in the midst of the first day of the conference. Mommy and the little kids and some of the big girls are washing laundry, and the rest of us are at the conference.

And that's all for now. I think. Hopefully we will have more to say later (unless of course the aforementioned volcanoes erupt, in which case we would have a lot more to say, but we wouldn't be there to say it).

It's been an exciting 2,000 miles and we praise the Lord for his hand of protection on all of us. His mercies are new every morning, and they will be new on the 2,000 miles back home, from Portland, Oregon to St. Louis, Missouri, with 16 Kleins and 2 vehicles. 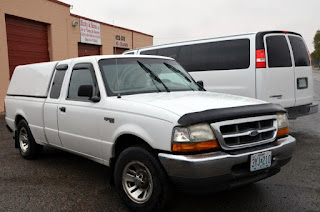 Isaiah 26:3, 4
"Thou wilt keep him in perfect peace, whose mind is stayed on thee: because he trusteth in thee. Trust ye in the Lord for ever: for in the Lord Jehovah is everlasting strength."

Thanks, Ben and Hannah, for the photos!

Did you know I grew up in Payette, Id? It is 50 minutes north of Boise and just on the other side of the Snake River from Ontario. I still have family members there in Idaho (and I went to school at the University of Idaho in Moscow). You were/are on my old stomping grounds! Aren't the mountains there beautiful?! I sure do miss them!!

My prayers are with you all in your conference and on your trip home.