Dave finished his first week on site in St. Louis at his new job, and it went very well! Everything seems to be a very good match. We have all enjoyed hearing the reports of the people he has met and the things he is doing. (We talk alot of shop around here!)

During Dave's week in St. Louis, the boys were supposed to be working on his upstairs home office, organizing, clearing out non-essentials.... 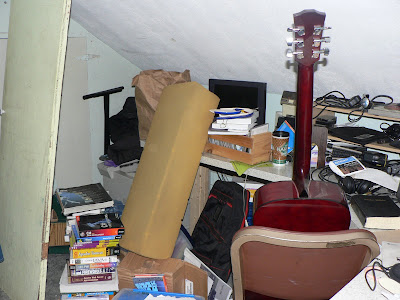 Note: Guitar is not considered non-essential. 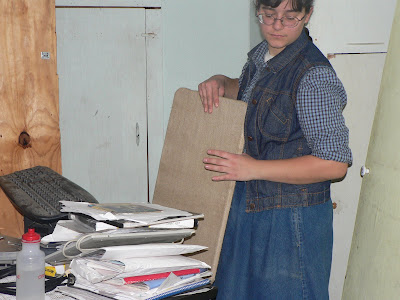 Sarah is the family organization queen, and what's really nice is she's really good at finding things too!

As much as we enjoy having Daddy working from home, the plan is to sell the house and move to the St. Louis area. Until that happens, Dave will be working from our house here in Wisconsin.

So, once Dave headed off for his week in St. Louis, we at home had some discussion about how best to install the door (aka sound barrier) he needed at the base of the stairs.

The attic features just an upstairs bedroom and had a plywood door at the base of the stairs. We originally intended to simply replace the plywood door with a normal door. Strangely enough, we found there were no wall studs in the place where the old door had been installed. Hmmm. Odd.

The idea was tossed out that we install the door at the top of the stairs instead. This would mean a little extra work, but the idea of surprising Daddy got everyone very energized and ready to go! In fact, we just grabbed some 2x4's we had lying around, and Zak started measuring and marking before we could get more! 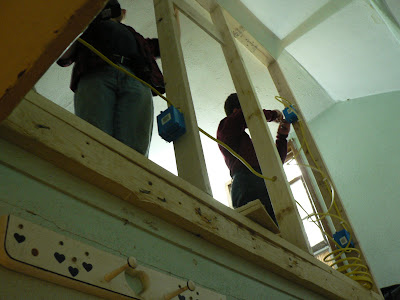 The attic bedroom really just had three walls, with a rail by the attic stairs. So, we decided to put a wall where the rail once was, and then put the door at the top of the stairs. This also allowed us to add some electricity to the other side of the room, along with a light switch. We had some surplus paneling and some extra used counter top, so the expense was minimal and the effect was maximum!

The wall studs are installed where the flimsy rail once was. This is the view from the bottom of attic stairs. 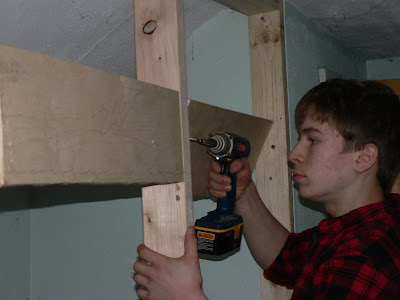 The new door went up easily after the wall studs were installed. Wall studs are really nice when installing a door....????? 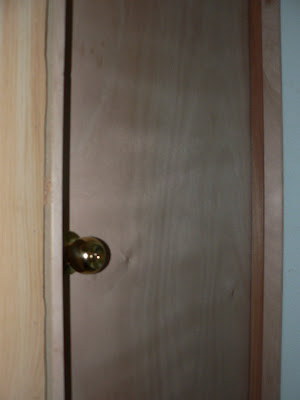 Ben wired the wall for a mounted light fixture in the office, as well as one really needed in that now very dark attic stairway.

Again, we thank the LORD for safety as the boys work on these things. It was a little unnerving for Mommy to hear the new nail gun puffing away. We got it on the tail-end of the new floor project, and it has made a big difference! 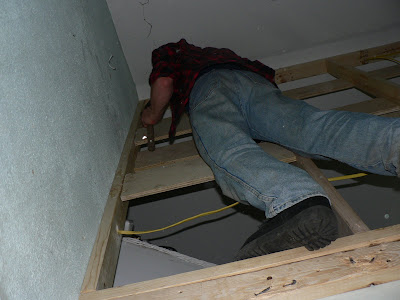 For this project we did splurge on getting some white melamine paneling, which Zak really wanted, to build in a white board on the new wall. It looks really nice. The surplus bus paneling was used to finish the stairway-facing part of the wall, and a wainscotting under the melamine inside the office.

Everyone anticipated what Dad's reaction would be, seeing the long-discussed door, and how we'd break the news....

"The bad news is, we couldn't install that door at the base of the stairs, because we found there were no wall studs, and the GOOD news is...." 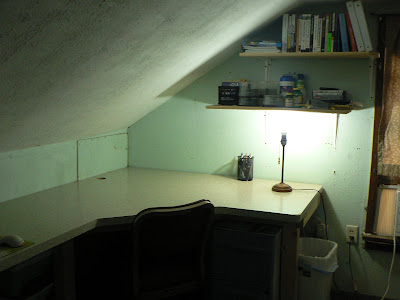 This is the newly cleaned and organized corner where Daddy works.... 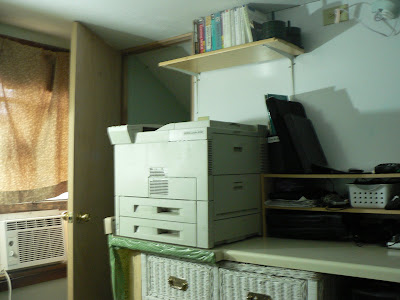 ... and this is the new door and melamine covered wall. The wall features new outlets, and a switched light fixture! The countertop was a roadside find, and Zak made cord holes in the back so power cords would not clutter the work surface. This side of the room is where Ben and Zak do their computer work...such as www.juglist.net.

Surprising Daddy made the week fly by for all of us, and the kids tried to work it out so that everyone could feel like they did some of the work, even if only vacuuming up the ladybugs. Zak had to scribe the paneling to fit the uneven ceiling, and Ben had to add a junction box, but as usual, Solomon did much of the grunt work. He is really acquiring a servant's attitude, which is of great value to the Lord, and a goal we have for each of us. It's also the ultimate purpose of projects like these...giving us opportunities serve others. Additional blessings are the fun of working together, learning to solve weird and wavy problems, and feeling the satisfaction of a job well-done, which Solomon truly felt! 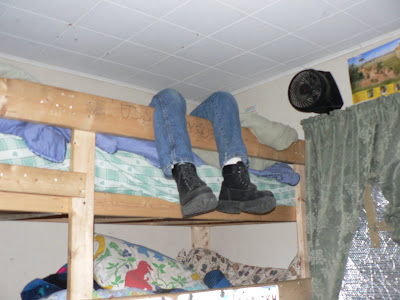 Amazing, you guys! Your skills in this area are incredible. Wow!!!
Debbie, you have a talented group of kids!

You know, really, it just started with learning to plunge the toilet and glue dresser drawers back together, dig sewer lines, etc.