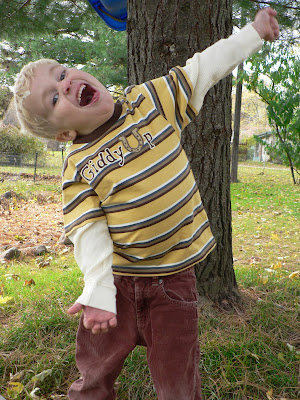 Gideon attained four years of age last week! This adorable shirt arrived from cousins Jami and Jessi and Auntie Jana and Uncle Jimmy. "Giddy" is Giddy's official nickname, and the reason is obvious, isn't it? 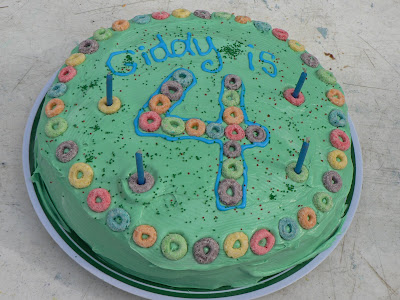 Abi is a fine cake decorator, as she gets lots of practice. Giddy requisitioned a GREEN cake. 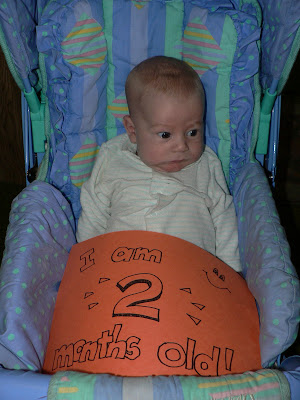 A few days later, Joshie attained two months of age! Abi intends to take a monthly photo of Joshua for his first year. He has really started smiling of late, but Abi couldn't get him to smile for this picture. His face seems to say, "So, the 2 month olds apparently do not get a cake." 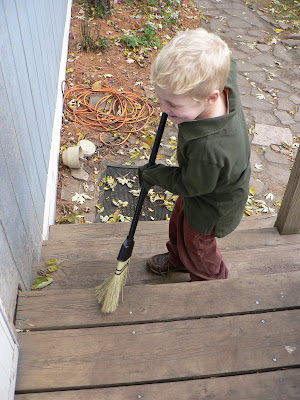 This useful little broom was greatly enjoyed by the birthday boy. He's had several whisk brooms, which usually get lost quick, but this was a "big boy broom". Woo woo! 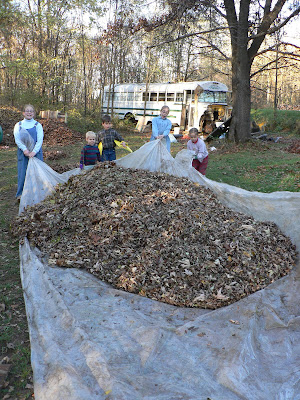 The "leaf journeys" have begun. Giddy enjoyed the leaf scoops (click on the picture to see Noah holding them). The kids made several trips to the compost pile, greatly increasing its height, and allowing them to hide within the pile, to surprise Daddy by staging a re-enactment of the eruption of Mt. St. Helens. They were (not even) motionless, under the leaves, when a collaborating sibling led Daddy out to see the tremendous amount of leaves they had gathered...then ka-blooy!! 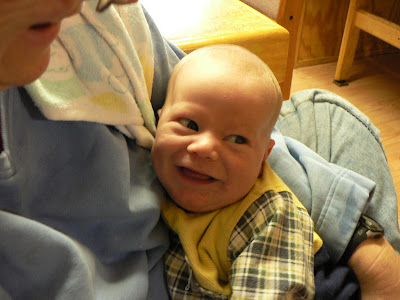 This is one of sweet baby Joshie's first smiles to be captured on digital media. It is so fun to play with him and coax a smile out of him. He actually caused a short traffic jam at Walmart: the lady in front of us at the checkout was enjoying watching Abi and Sarah playing with him, and the cashier had to inform her it was her turn to put her groceries on the conveyor belt!
Posted by Debbie at 8:48 PM