A short time before leaving for China, it became my duty daily to dress the foot of a patient suffering from senile gangrene. The disease commenced, as usual, insidiously, and the patient had little idea that he was a doomed man, and probably had not long to live. I was not the first to attend to him, but when the case was transferred to me, I naturally became very anxious about his soul. The family with whom he lived were Christians, and from them I learned that he was an avowed atheist, and very antagonistic to anything religious. They had, without asking his consent, invited a Scripture reader to visit him, but in great passion he had ordered him from the room. The vicar of the district had also called, hoping to help him; but he had spit in his face, and refused to allow him to speak to him. His passionate temper was described to me as very violent, and altogether the case seemed to be as hopeless as could well be imagined.

Upon first commencing to attend him I prayed much about it; but for two or three days said nothing to him of a religious nature. By special care in dressing his diseased limb I was able considerably to lessen his sufferings, and he soon began to manifest grateful appreciation of my services. One day, with a trembling heart, I took advantage of his warm acknowledgments to tell him what was the spring of my action, and to speak of his own solemn position and need of God's mercy through Christ. It was evidently only by a powerful effort of self-restraint that he kept his lips closed. He turned over in bed with his back to me, and uttered no word.

I could not get the poor man out of my mind, and very often through each day I pleaded with God, by His Spirit, to save him ere He took him hence. After dressing the wound and relieving his pain, I never failed to say a few words to him, which I hoped the Lord would bless. He always turned his back to me, looking annoyed, but never spoke a word in reply.

After continuing this for some time, my heart sank. It seemed to me that I was not only doing no good, but perhaps really hardening him and increasing his guilt. One day, after dressing his limb and washing my hands, instead of returning to the bedside to speak to him, I went to the door, and stood hesitating for a few moments with the thought in my mind, "Ephraim is joined to his idols; let him alone." I looked at the man and saw his surprise, as it was the first time since speaking to him that I had attempted to leave without going up to his bedside to say a few words for my Master. I could bear it no longer. Bursting into tears, I crossed the room and said, "My friend, whether you will hear or whether you will forbear, I must deliver my soul," and went on to speak very earnestly to him, telling him with many tears how much I wished that he would let me pray with him. To my unspeakable joy he did not turn away, but replied, "If it will be a relief to you, do." I need scarcely say that I fell on my knees and poured out my whole soul to God on his behalf. I believe the Lord then and there wrought a change in his soul.

— Hudson Taylor, from A Retrospect

In February of last year, we held our 7th annual St Louis Homeschool Missions Fair. It was a wonderful time of fellowship and encouraging one another in light of what God is doing in other parts of the world. And we were reminded of our part in that work.

It’s always a great time with likeminded believers, looking to see the gospel go where it is yet to be heard. We hope you can make it!

For more information or to sign up, email us at

daveanddebklein@yahoo.com.  There is no fee, but RSVP is required by February 28, 2021.

We’d love to see you there!

“...that ye should shew forth the praises of him who hath called you out of darkness into his marvellous light: Which in time past were not a people, but are now the people of God: which had not obtained mercy, but now have obtained mercy.” 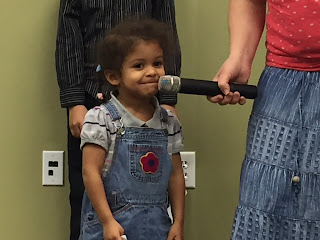