This past April, we held a CocoaConf in Yosemite National Park, California. This conference isn’t quite as technical as most of our events – it’s more of a broader look at Apple technology than an in-depth training event. (That would be hard to get away with in such a distracting place as Yosemite.) :)

The crew for this event was made up of Mommy, Ben, Solomon, Joanna, Bekah, Sammy, Josh, Daniel, and myself. It was a combined business trip and also family visit, as we were able to arrange with Grandpa Bill and Grandma Penny to meet up with them at Yosemite and explore the valley during the conference.


We took a southernly route to California, following the Route 66 corridor. Along the way we stopped at the beautiful Painted Desert of Arizona. It was a very windy day, so we didn’t do much hiking about in search of petrified wood, but we did get out alongside the road. The older kids enjoyed taking pictures and scrutinizing the geology of the area while the younger ones enjoyed spelunking to the best that circumstances would allow. 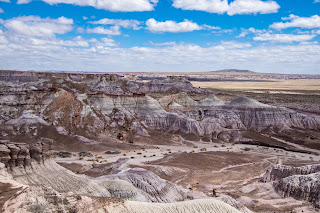 We arrived at Yosemite the evening before the conference was to begin, and the next morning, while waiting to set up in the conference center, we caught up on laundry at Housekeeping Village.

In Daddy’s absence, Solomon took care of some of the emcee duties (one of our conference speakers took a share in it as well). 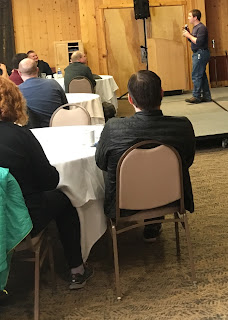 And we got to see Grandpa and Grandma! :) 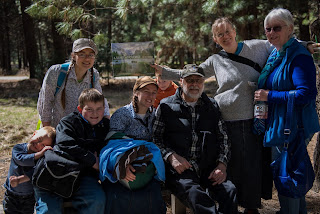 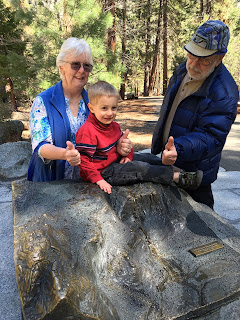 During the afternoons, we had a break during the conference for attendees to go out and explore, and during that time most of us were available to venture out as well. 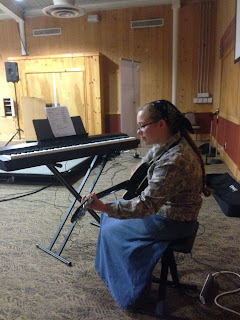 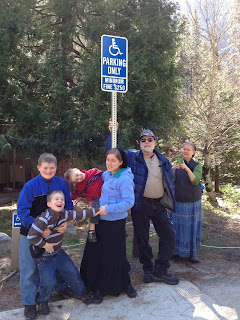 On the last day, we ended up having room at the conference for all of us to have lunch together before we left. 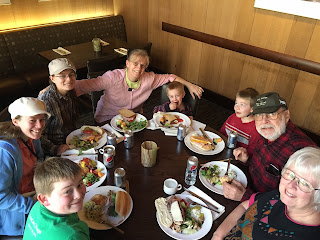 And then we headed up out of Yosemite Valley. We happened to hear from someone there that at that time of year, at a certain time in the afternoon, you could see a rainbow in Bridalveil Fall from Tunnel Viewpoint. So we made that a stop on our way out, and got there just as the colors were showing up in the waterfall. It was gorgeous! :)

Traveling home the same way we came, we stopped this time at the Arizona Meteor Crater – our first time there since almost 20 years ago. 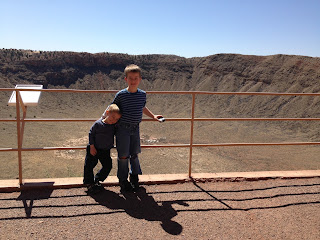 It was impressive, but hard to grasp just how big it is – a mile across, 600 feet deep.

There’s a neat museum at the rim about the history of the meteor crater, how they figured out it was caused by a meteor and not volcanic, and about meteor impacts in general.

In Albuquerque, New Mexico, we went to Garfield Bible Chapel for their Sunday meeting. We’ve stopped there before, on our travels to the West, and it was neat to see friends again, and make new friends. We happened to come on a day when a missionary from France was visiting, and he gave an encouraging message reminding us all that we are called to be Christ’s witnesses wherever we go. “A good witness is faithful – never adding or subtracting.”

And then we made it home! To find out that some people left at home had been busy during our absence… 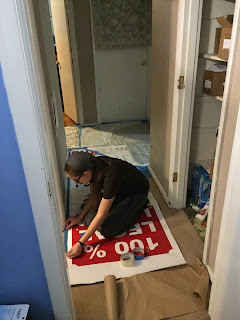 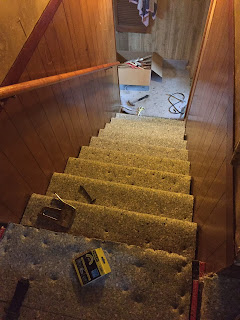 Sarah, Suby, Noah, Abi, and Daddy surprised Mommy by painting the hallway and replacing the carpet on the basement stairs.

And thus was our trip to Yosemite this year. :)
Posted by Hannah at 2:11 PM