Today marks six years since the homegoing of our dear brother in Christ, Art Dappen.  We hope this article of his will be a blessing to fellow christian parents.

I have seen fire extinguishers in buildings to be used in case of fire. Normally there are words written on the outside of the extinguisher to explain its use. An employee isn’t paid to stand there day after
day, saying to those who pass by, “Look, this is a fire extinguisher in case there is a fire. It works like this.”

An employee is not necessary. A simple written sign is sufficient.

Likewise, God has already spoken by his prophets and by his Son almost everything that he needs to tell us. There is no need to repeat it again.

What the prophets wrote is sufficient. And since the Word of God is eternal, there is no need to revise it or change it.

One day John Paton, a missionary to the Islands of the Pacific, was building his house on the island of Aniwa, and needed some nails and tools. He grabbed a piece of planed wood and with a pencil wrote a few words on it. He handed the wood to the old chief Namakei, asking him to take it to Mrs. Paton, who would send the things they needed. The chief looked doubtful and asked, “But what do you want?” The missionary replied, “The wood will tell her.” The chief was angry, thinking that the missionary was making fun of him, and demanded, “Has anyone ever heard wood speak?”

But after much persuasion the chief took the wood. He was amazed when the woman looked briefly
at the wood and then gave him the things without being told what they needed. The chief brought back the things, and made eager signs that he wanted an explanation. The missionary looked at the wood and read the words in the island dialect, and informed the chief that in the same way, God speaks to us in his Book. There God has written his will, and when anyone reads it, they can hear God speaking in the Book, just as Mrs. Paton had heard her husband speaking in the wood.

This incident awoke in the poor chief a great desire to see the Word of God printed in his own language.

He began helping the missionary to learn the words and expressions of his dialect with much enthusiasm.

And when at last the missionary began to translate portions of the Scripture, the joy of the chief was unbounded. (John Paton, Missionary Patriarch, reprinted Vision Forum, 2001, p.320.)

This story repeats itself in hundreds of places around the world. The people who live in darkness see a great light when they hear the Word of God.

Electricity is arriving in many tribes, and soon afterward the televisions. It is a shame that the electronic message of materialism is arriving before the Word of God. Jesus Christ is calling his disciples to
arise and go. We are in a race, and we must get there first with the gospel. ✞ 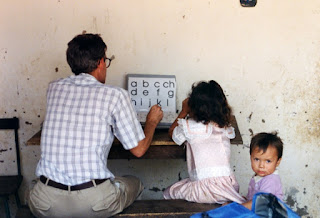