One morning, we woke up, and after devotions and chores, got ready to sit down for breakfast. We opened the front window, and expected to see this: 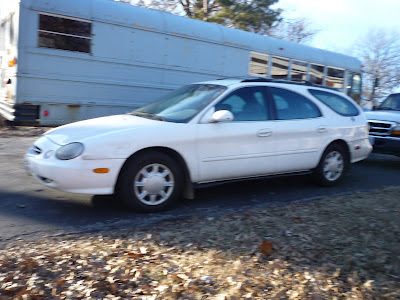 However, on this particular morning, we just saw this: 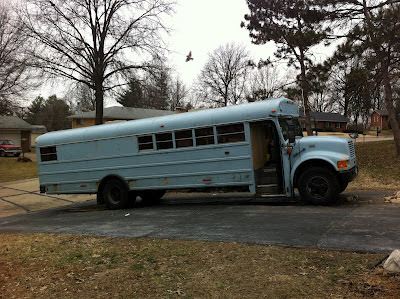 The perceptive reader will notice that something is missing.
Yes, we had a vehicle stolen from our driveway. An old vehicle, too!
We filed a police report and were told that our model station wagon was very easy to start with just a screwdriver, so it was a favorite among car thieves. We were also told that they would call us as soon as they found it. This gave some of the children the hope that the officer was straight on his way to go track down our station wagon. But we explained to the children that its recovery was not too likely.
Well, we were a bit shocked that our sleek street machine was stolen from among the offerings on our street, but after all, we still had this: 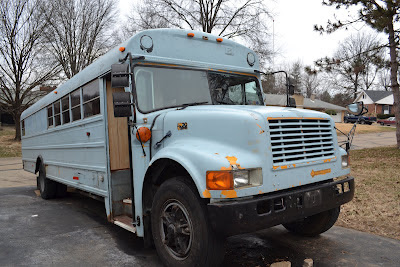 It's a bit overkill for a quick stop for some bathroom tissue, but at least it fit us all and it ran.
However, a few days later, we found that it would not start. It was just stuck in the driveway.
At this point, we realized the driveway was beginning to be a problem.
After some troubleshooting, we found the bus was suffering from unidentified problems. We kind of narrowed it down to a fuel pump (hope hope), and so after consulting with Uncle Danny in Mexico, we ordered a new fuel pump and purchased necessary accessories to complete the replacement. This included kerosene, because it was 18 degrees during the day, and we needed to use a kerosene heater outside to keep Solomon's hands thawed so he could pull the pump!
Well, after a few days of dismantling, Solomon became less confident he could pull the pump, and even less confident that the pump was the problem. So, we checked out the prices for steel, thinking maybe we should scrap this bus and move on to bus #3 (which we purchased back in October, anticipating that we'd be moving up soon). The steel prices were pretty good, so we made arrangements to scrap the bus.
This was much less emotional for Mommy than scraping bus number 1. We had good memories in this bus, but its acquisition wasn't quite a pivotal point in our lives as the first bus. 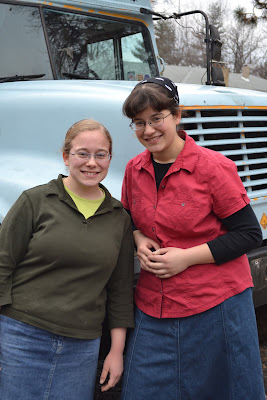 Hannah and Sarah pose for a parting shot. Bye-bye, bus #2!
So, for a sizeable fee, we hired us a wrecker truck and Zak followed it to the scrap yard, expecting to drop off the bus and pick up a big fat check. 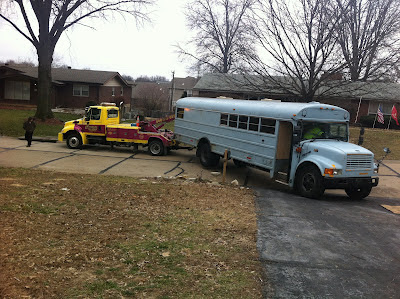 We'd then pay the wrecker and pocket the difference.
However, we didn't realize that they required that we first empty all the fluids and remove the fuel tank before they could accept it for scrap.
So, after waiting in line for a while and being turned away, the wrecker dropped the bus at a nearby parking lot (because we needed a flat place to work on draining the fluids), and we paid the wrecker for taking our 35 foot bu$ on a $ight$eeing trip through $t Louis.
We are not making this up.
And our failed attempt to drop off the bus occurred on a Friday, so we were unable to take it in again until Monday. So, we made arrangements to work on emptying the fluids at the parking lot. We were also able to get special permission to just drain the fuel tank rather that removing it. 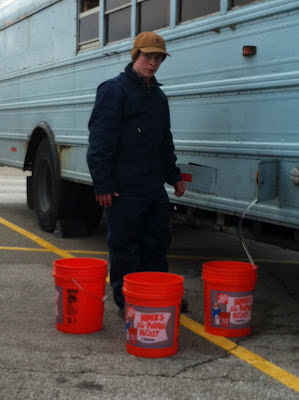 So, the boys headed over to the parking lot with a bunch of empty buckets.
You see, while we were working on the fuel pump, we wanted to make sure that the problem wasn't that we were low on diesel (since we park the bus on an incline, as we are inKLEINed to do). So, that tank was good and full. Siphoning commenced immediately.
Then we wanted to ensure there would be no problem at the scrap yard, so we devised a fool-proof (and poof-proof) way to puncture the tank, assuring the authorities that it was dry. After doing so, we learned, it was dry.
So, Monday, it was back to the scrap yard. The lady in the shack was so friendly and helpful, and it was a quick transaction. 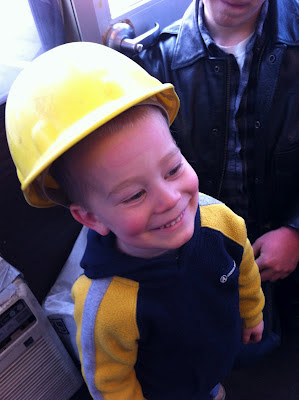 Joshie enjoyed visiting the shack while they checked out the bus and cut us a check.
Then, we returned to find this: That was just being dramatic. Our driveway wasn't completely empty. We still had Zak's pickup truck. It seats 5 passengers.
Well, if you have been studying the weather in the midwest this winter, you have noticed that the jet stream has been doing the wave. So we soon exchanged our kerosene tanks for these: 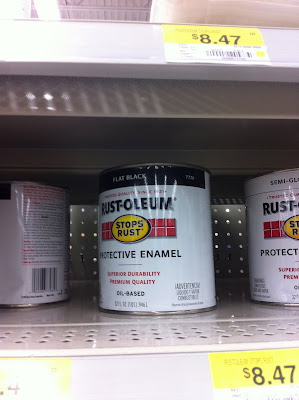 You see, in between our days of 18 degree highs, we were having days in the 60's and 70's, which meant we could begin painting our new bus.... in FEBRUARY!! This is just unheard of normally, to have warm weather like that, but the Lord worked it out, as the jet stream went up and down through the month.
We have dear friends out in the country who graciously offered to let us store and work on the bus at their place. So we packed up the pickup and made some trips out to get rolling! 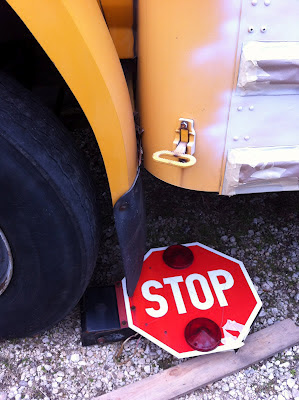 And so, RV conversion #3 has officially commenced! 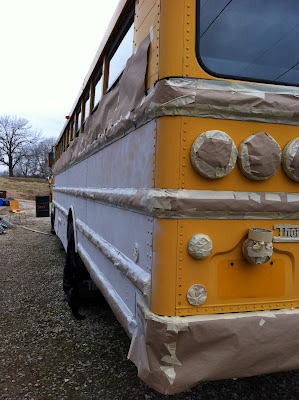 Time is of the smell, as we like to say, so we weren't too picky about the exterior color scheme. We've learned that no matter what color we paint it, it just says "school bus". 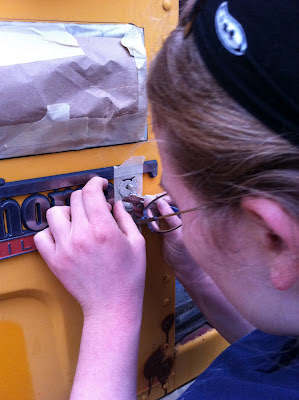 However, our crew puts a lot of care and detail into each step of the way. They have gotten more skilled and experienced... and they recognize an opportunity for a 12 pack of diet Mountain Dew when they see one coming. 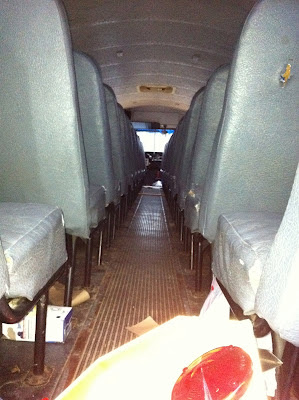 The inside needs a lot of work still, but we are mostly focusing on the paint and hoping we can get it looking nice enough to impress the neighbors. We suspect some of them have kinda gotten used to the conspicuous void on our driveway. 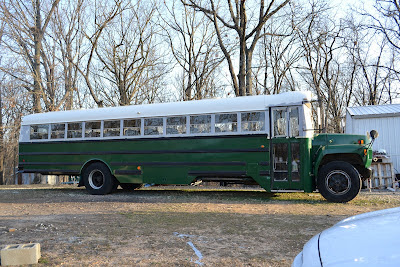 So we are a little past this point. In the photo above, the roof has grey primer, but we are actually finishing it with a cream color, giving it more of an Eddie Bauer look. Don't you think?
In a surprising turn of events, we received a call from the police 3 weeks after the wagon was stolen that it had been located! And apart from the ignition getting ripped out, it was in wonderful shape!
Now, with two vehicles, we more than doubled our passenger capacity! However, we were still a few seats short. Since Dave and the boys work from home, the only time we were really put out was on Sundays, as we normally took another family to church, as well as ourselves. However, we found it very easy to find folks willing to help out with transportation. 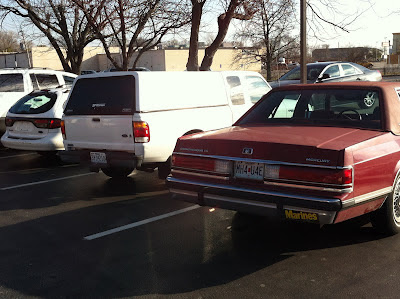 And here we are on a rare family outing. The big old red car on the right belongs to our dear neighbors, who lend it to us whenever we need it.
Well, there's more -- we landed a really inexpensive interim van to use until we get #3 on the road.
But for now, that is a good summary of a family of 15 who is between buses!
Posted by Debbie at 1:01 PM

Labels: interesting situations, RV conversion, why everyone NEEDS a bus