More on teaching reading with the Bible

Our next reading student is fast approaching fluency and is more self-motivated in reading and writing. He often corners siblings or parents and requests them to read a word he has written (rather than asking how to spell it, he tries and then asks us to read it!). 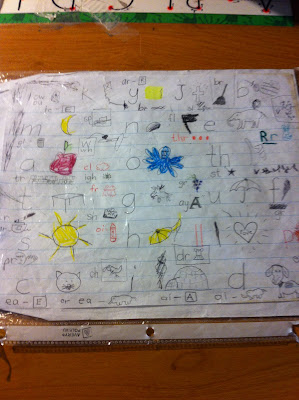 We have been using this paper to record new letter sounds he is learning. We did start with m, a, t, c, d, and b and then have been adding additional sounds for words that are pretty easy to sound out.
In our previous phonics program, sounds were introduced in a certain order (of commonality I think) and then the phonics reader would only use those sounds. What we are doing is letting the Bible passage kind of dictate the order that we are introducing sounds (and the pattern is similar). So Gideon refers to this paper (we put it in a sheet protector) as he reads.
We have a notebook that has some letter sounds and examples of various phonetic tricks. Sometimes we write out a bunch of examples of letter sounds, and refer to them later. 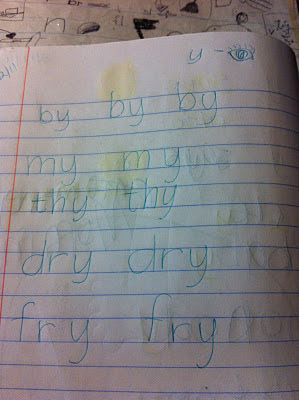 Here's one for using the letter y as a vowel. 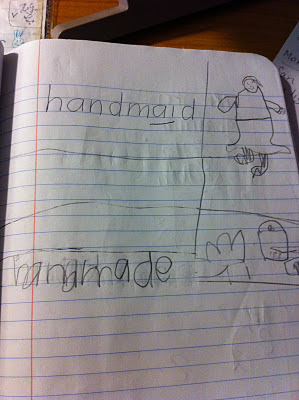 We also write out illustrations or reminders of tricky English things. Here is one for a homonym I probably would have never thought of! Giddy noted it! 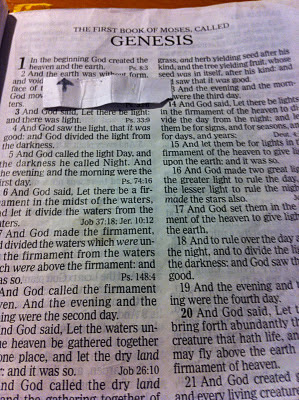 I have made these little "guides" for sounding out words for quite a while. (Where do they all go?) They are helpful to with isolating letters the child is sounding out. They help him to not get lost on the page.
Gideon can sound out lots of words. Some of them he will "read" without sounding out, so we go over them again. "Firmament" looks familiar to him, so he sometimes just says it. But it's a very easy word to sound out, so we just slow down and do it.
Some words, like "said" would be sight words. He tries to sound them out and usually figures out what they are. So its like a combo deal; they are irregular, but you can kind of sound them out "s" "a" "i" "d". Coincidental, but it does work.
Reading the Bible aloud
We now are at the point where Gideon can push himself along reading with less need for prompting. We often select passages and trade off reading. We used to read every other verse (which works well), but sometimes he will read seven verses and then I will. However, now that he is a bit stronger, he will kind of read some of my verses, too. Not my intent, but it's encouraging.
Learning Styles
We have not pursued much with learning styles. I'm sure if we analyzed it, we are making use of some learning styles of some sort, but we mostly take into account that a child has to learn to handle the way things are when they encounter them. We make modifications to take into account their abilities, but have noticed that they are pretty adaptable. (That is how we have approached lots of things, not just reading.)
We have observed that a child is more teachable if he have humility, just as the Bible says. While some of our children have needed more encouragement or have taken longer to "get it," the biggest obstacle to teaching them is their attitude (or OURS!).
We have an objective goal: reading the Bible. We don't have a grade level to attain, but we do seek to have them exercise their full abilities. With individualized attention (which is not limited to a class room hour, but includes all the waking hours), we can observe character issues with which we must deal. In our experience, that is what really greases the wheels of learning, and if we don't deal with these issues, we are setting ourselves up for failure (even if they figure out phonics!).
Bible Time Line 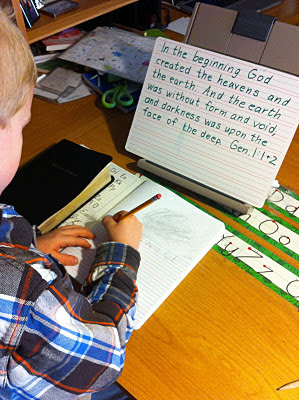 Gideon is just starting a Bible time line using one of those composition books with half a page blank for pictures. We have done time line pictures with words on unlined paper, but this is in a book so it's more difficult to lose.
He is really excited about the time line, especially the picture aspect of it, and hardly notices the writing. That isn't the point, but it is an opportunity for him to use writing. He also enjoys letter writing. We just look for opportunities to use writing such as "letter writing time" rather than "writing time". The skills are still improved, but they are redeeming the time.
So, just some thoughts on teaching reading with the Bible.
Posted by Debbie at 11:06 AM

Labels: teaching reading with the Bible