It is a good thing to give thanks unto the LORD!
Psalm 92:1 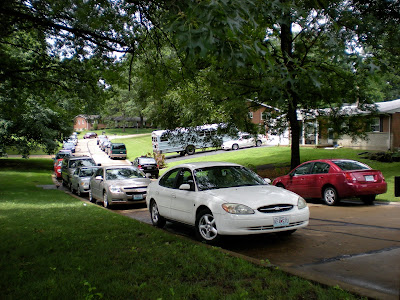 On July 18, we finally had our much anticipated open house with our whole church, as we have wanted to do since we moved here! We decided to have it on the Sunday nearest our 25th anniversary. The theme of the open house was thanksgiving, because we are so thankful to the LORD for 25 awesome years of lawfully wedded bliss. It was an awesome time! Including us, there were about 80 people in our house!

We had decided to serve haystacks for lunch. If you don't know about haystacks, you need to wise up. Basically, its taco salad, set up like a buffet and you make it yourself. Yummy!

As the RSVPs began to stack up, we started trying to figure out how much food to get, and we did really well: we had enough left over to eat off of for about a week, plus enough onions to do anything else we wanted (we heard some were used for an ice cream topping!).

Of course, we were all glad to have the sewer problem behind us, as that was severely threatening the comfort of our guests! However, on cooking day, our cooktop stopped working. A gracious neighbor allowed us to borrow their kitchen, and the girls hauled umpteen pounds of beef, beans, and rice up and down the street. Phew!

We also had to move our furniture around and set up tables and chairs, many of which we borrowed from church. We were just about ready, when our friends the Morells showed up!

The Morells were on a summer road trip, and we had already scheduled our open house before they let us know they were coming. But we decided to kind of surprise them, and didn't mention that we were having some other people over, too.

After being welcomed with some strange comments from their hosts and then looking at the strange arrangement of our furniture, they surmised something was up. 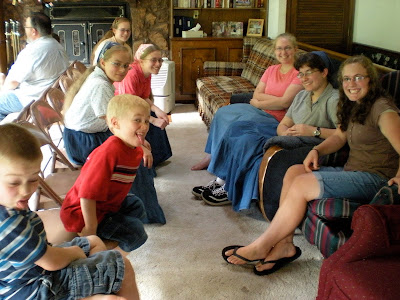 We didn't get too far into our visit before they learned of our timely stove problem. Without much ado, they whipped out their electrical gear and were on the job! 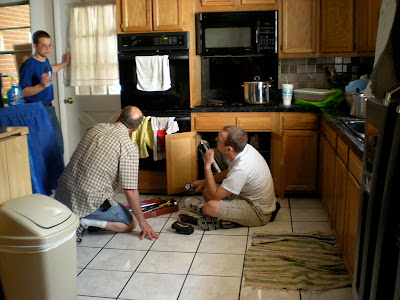 In no time, we were back to cooking with coils! Thanks guys!

The Klein girls were thankful for friends to help blow up balloons and decorate! 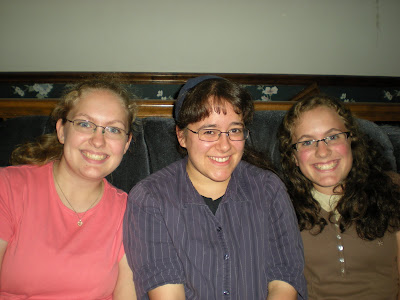 We wanted it to be a general thanksgiving theme and plastered the walls with thanksgiving scriptures that the kids made. However, on the morning of the open house, we found a surprise conspicuously plastered on a wall....

That was Abi's handiwork and it made me cry. Wow, does that say 25?

After a great time at church with the Morells, a Klein team rushed home in the bus to set up for the meal. Also, to make sure we got a parking place before our guests arrived.

We were pretty excited and tried to make sure everything was ready in time, and we were just about ready with the first folks trickled in.

The haystacks went over pretty big; they were soooo yummy. We set up two food lines in our kitchen. This house is just so huge, so nearly everyone was sitting at a table. It's also so huge that the air conditioner has to work pretty hard on hot days! We were thankful that we had some good thunderstorms that very morning, so it didn't get nearly as hot as we anticipated. We had fans all over the place to try to keep the air moving. 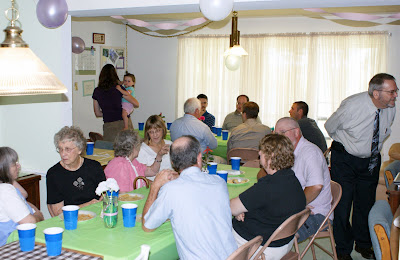 We were so happy that so many folks came. It was really great. 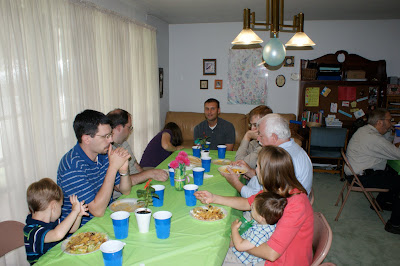 Sarah surprised us with tons of beautiful pink and white handmade paper carnations for table decorations; they looked absolutely real! 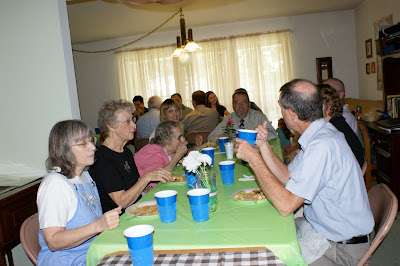 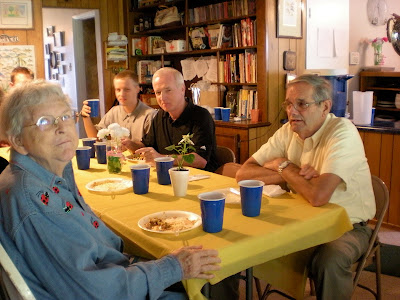 The cake was made by our sweet friend Mary, and it weighed a ton and was so beautiful and proved to be very yummy! 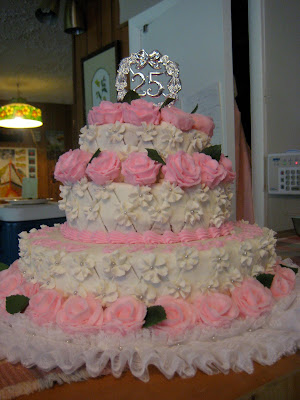 After everyone was fairly stuffed, we gathered in and near the den had a thankgiving sharing time. It was great to hear the ways the Lord has worked in other's lives. He is so good to us! 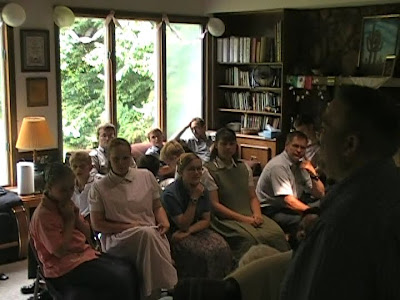 Dave opened the time up with some very sweet sentiments...sniff sniff. 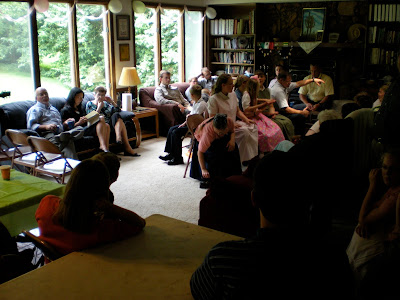 We are so thankful for the brothers and sisters we have met here in Missouri! 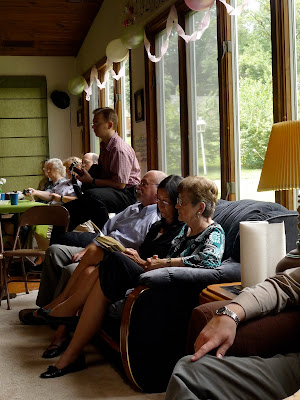 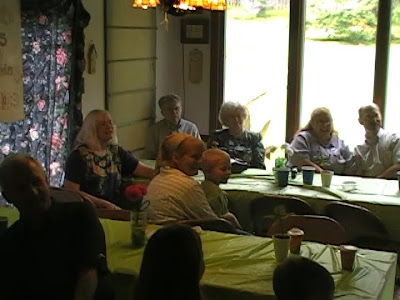 After that, we lingered and visited, and some people had to go...hopefully it wasn't because Dave threatened them, I mean offered them, more ONIONS.... 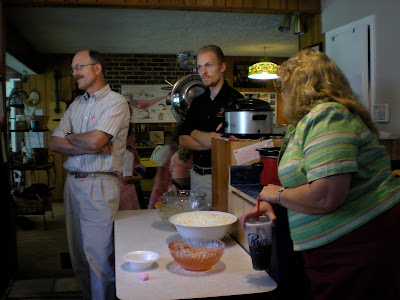 Click on the photo above if you want to see how many we had left in that white serving bowl after 80 people had their lunch! 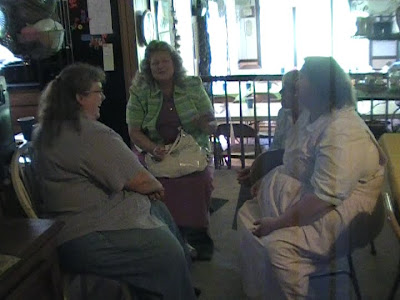 Leftover haystacks for dinner with our houseguests....no complaints from anyone! 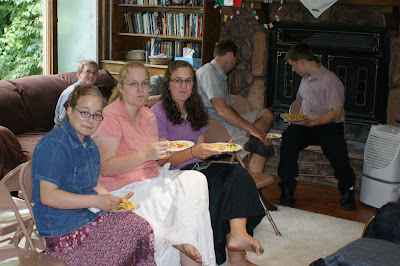 We saw the Morells off the next morning, as they continued their trip south.

The next morning was also our TWENTY FIFTH ANNIVERSARY!

"What do you want to do?" Dave excitedly asked me. It was easy to answer...

You see, for a couple of weeks, our dryer had been out of commission. After a failed repair attempt, we broke down and bought another one. But, mysteriously, it wound up having the exact same problem! Know why? Because the electrical connection was messed up! Both dryers worked fine! So, until we could get that fixed, we were back to the laundromat.

"I want to go to the laundromat!!"

Dave sweetly agreed, and the children happily loaded 6 hampers, 4 laundry baskets, the detergent, and about a dozen pink and green balloons into the appropriately attired station wagon. We got a bunch of quarters in the change machine, hit the McDonald's drive through across the street from the Clean Connection, and ate lunch in the car while watching a cool thunderstorm. 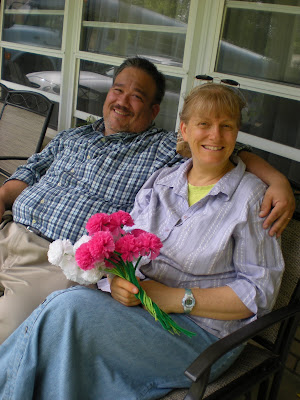 Looks like you all had a fabulous time! We are sorry we missed it and hope in the future we will be able to spend some time with the Klein family.

You all have been a blessing to our church and to my family!