Last weekend Dave took the four oldest boys on a little trip, so we decided it would be a great time to tackle the girls' bedroom. Our goals included: painting walls and ceiling and replacing the carpeting. Those tasks are pretty substantial. But in order to do them, we had to empty the entire room and closet, disassemble and remove the built in bunks and curtain hardware, pull out the old flooring and do some patching and priming. 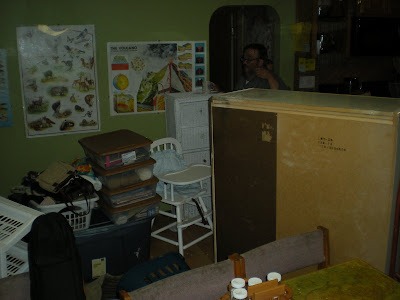 But typical to our manner of working, we decided to do some preliminary work on the rear (a.k.a. the "yucky bathroom"), which meant disconnecting our front loading washer, and moving all the stuff we store in it to the mudroom. So our laundry was being processed outside on the wringer washer, and every usable nook was used for storing things that could not be in their normal place.

Since Walmart had seedless watermelons for $2 a piece, we had stockpiled a bunch of those on the front porch as well. So, certain of us were literally walking on watermelons! (We don't recommend this though!)

Well, the boys helped with moving the big dresser, and then we bade them goodbye, and got to work. Our girls LOVE power tools! 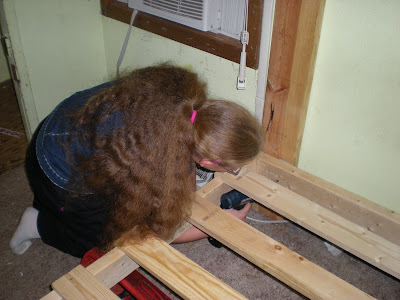 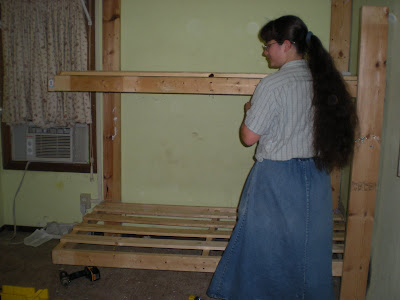 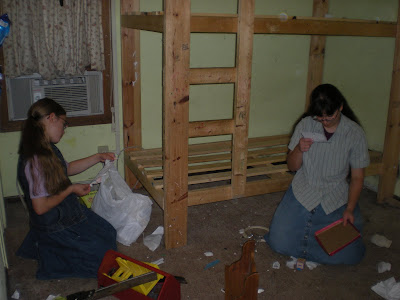 Giddy enjoyed helping (or would that be looting??)... 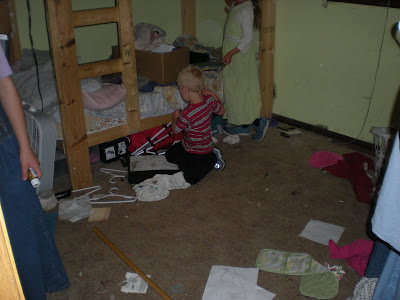 We sure got our money's worth out of this coat of paint, don't you think? 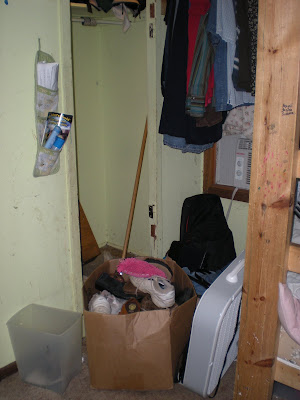 Further complicating things, our garden was really needing some attention, so we tried to do a batch of salsa. 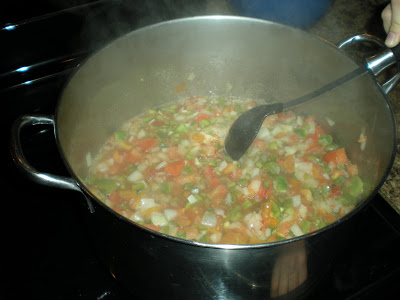 My hopes to can green beans were happily postponed, so we just froze them. 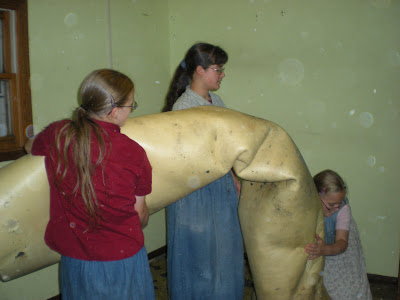 Joshie spent a lot more time in his high chair, as there were few safe places for him to make his rounds. Sometimes when we are packed like this, we will eat at the dinettes in the bus. Our normal practice of eating outside all summer didn't work during the rainy weekend, though. 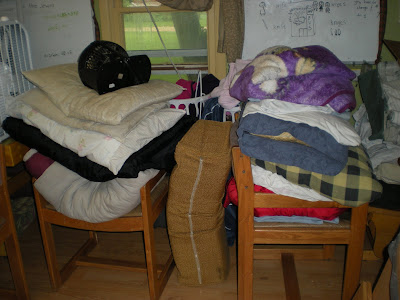 After putting a few coats of Kilz on some spots, we painted. The old color was a sunny green color, even in the closet and on the ceiling. The closet is under the stairs, so painting that (which was also green) was pretty time consuming. 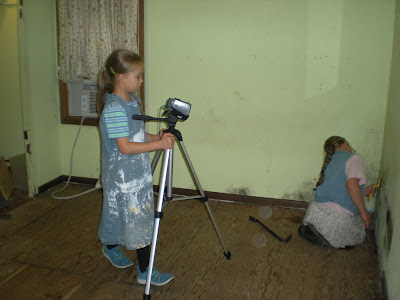 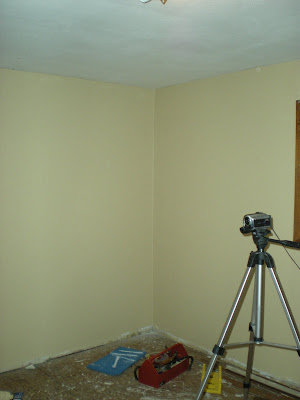 The carpet was a provision from the Lord...from the side of the road. I found it last summer, very plush, high quality, with pad, and in nearly new condition. No smoke or hair. And, it was pink! So we stored it all winter in the old bus, and then the garage. There was a lot of it, but we did need to do one seam to cover the girls' floor. So, we rented a seam iron. We got some instructions off the internet for installing carpet and doing seams, and Sarah gave them a good read. 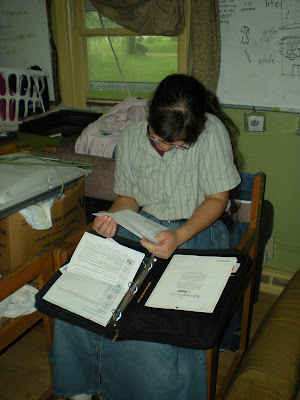 The weekend was rainy, so we did everything indoors. 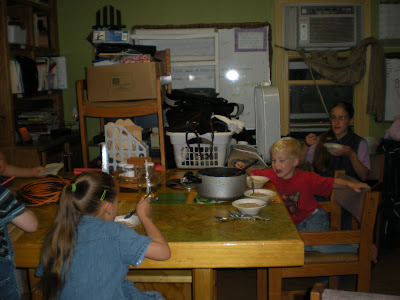 The boys were on their way home by the time we got to the carpet laying part. First step was to install the tackless boards, which actually have tacks.... 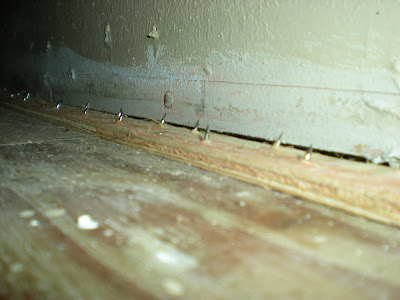 However, the instructions Sarah had didn't mention that the tacks should point towards the walls, to hold the carpet. So after they had done the whole perimeter, I remembered to tell them, in some literature I had read, that the tacks had to point to the walls! Fortunately, they only had to remove and replace 3 of the strips! All the rest had just happened to be installed correctly!

During most of this time, Abi was hard at work doing all our tons of wash on the wringer washer outside, and Joanna was priming and painting the girls' bunk beds to match the walls. There was no way around re-installing the bunks, but they would look much more "inviting"... 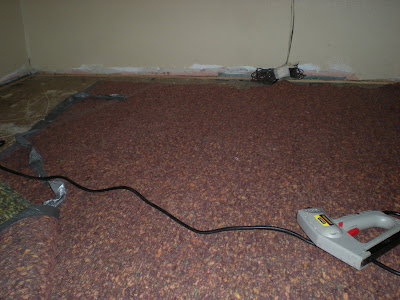 The pad was very high quality, and both carpet and pad was so clean! Abi and Sarah pieced the pad together and stapled it down, taping the seams with duct tape. 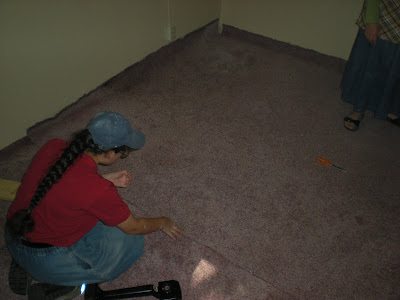 After a brief break to clear out the boys' bedroom so they'd have a place to sleep, we were back to the carpet. It was a little hard to find a place outside to lay out and measure the carpet, so we could figure out how to cut it to fit the room. The ground was still wet. And there was no place in the house, obviously. We used a tarp on the grass. Zak helped in cutting the corners of the carpet, so it would lay properly in the bedroom. The whole house was filled with smoke from the seam iron...but Sarah was able to figure it out, and it was securely bonded. 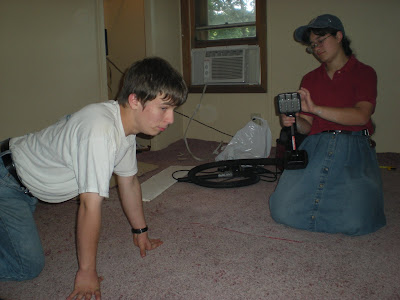 The next step was using the knee-kicker to hook the carpet perimeter onto the tackless strips. That was pretty simple. Sarah got some help from Zak with the tool and cutting. Abi also did quite a bit. Here, Solomon is just enjoying being on the nicest carpeting in our house!

Installing the trim and the threshold for the door gave the room a finished look.

The closet also needed some help. After being painted to match the room, we realized with a couple of inexpensive closet rods placed just so, we could double the amount of storage we had previously (with just one rod). This design used the space under the stairs more effectively. 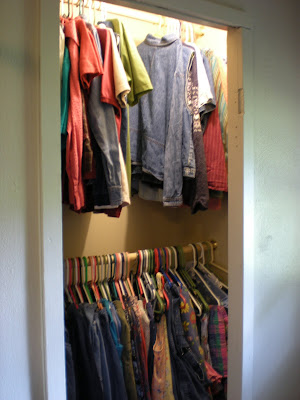 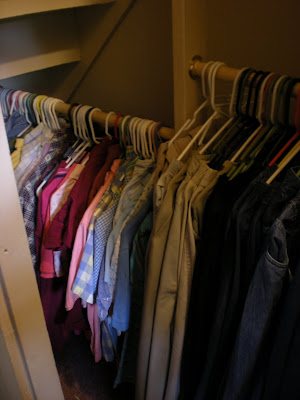 At the earliest opportunity, the girls had Joshie into the room to try out the new carpet! He enjoyed the nice laminate flooring in the main rooms, but the carpet was such a treat and he crawled happily in circles all over the room! 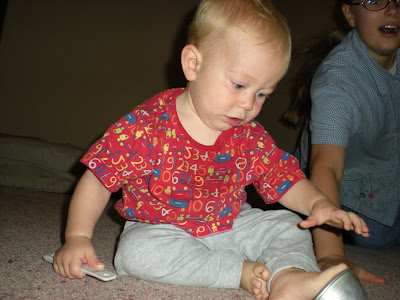 We had a fair amount of carpet left, even after the closet floor was done, so we decided it would be so nice to do the attic stairs as well! They were painted wood, and were pretty worn and did not look that great. Working late one night (out of necessity, as nobody could use the stairs during the process), Sarah transformed them into a plush, non-squeaky, pink elevated pathway. Dave really enjoys his trot up to the office now! 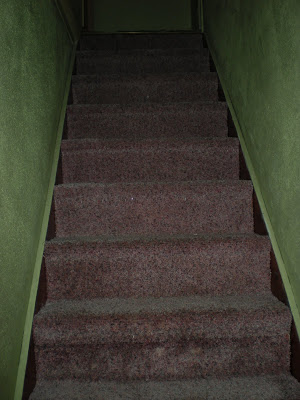 So, while they are not completely done with everything, the room is mostly put back together, and the sisters are really enjoying the transformation...everyone is! 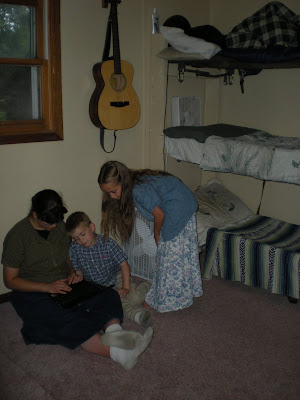 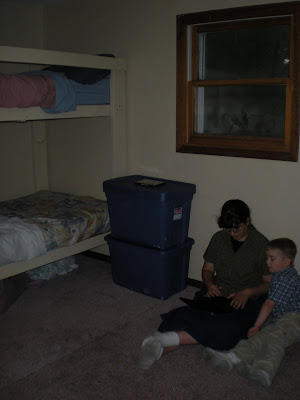