Here are some photos of our big trip to St Louis and the St Louis homeschool conference.

We arrived in St Louis during a heatwave; it was even hot back home in Wisconsin! Of course, we knew it would be hot anyway. We had reservations at a RV campground near the conference venue. 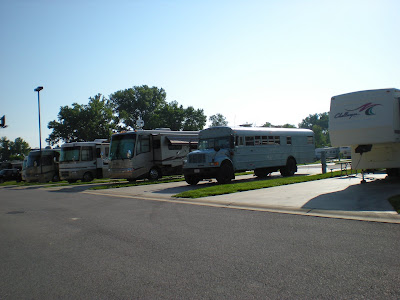 We also rented a little cabin nearby our RV spot. The amentities we looked forward to in the cabin were air conditioning and a private bathroom. 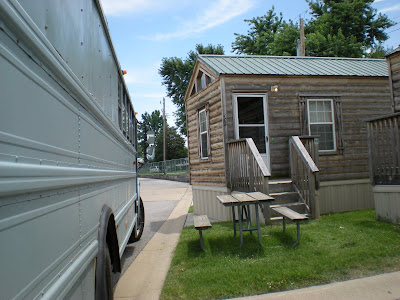 The amenity which Joshie looked forward to was the kitchen sink. 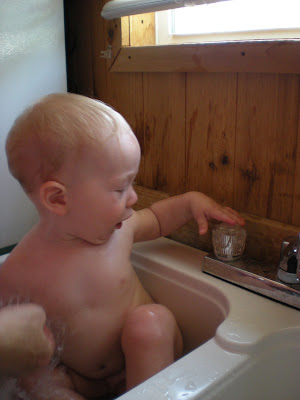 We arrived late at night, and the next morning was conference set-up day. Since Dave didn't need to help with that, first we dropped off Dave at his office in downtown St Louis, a short walk to the arch. 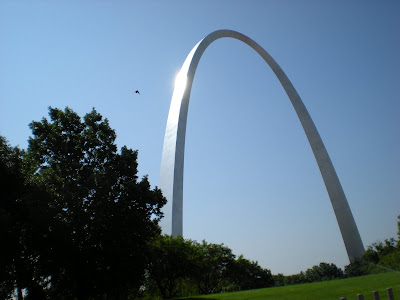 Then we drove to the conference center and set up our table, which didn't take long. 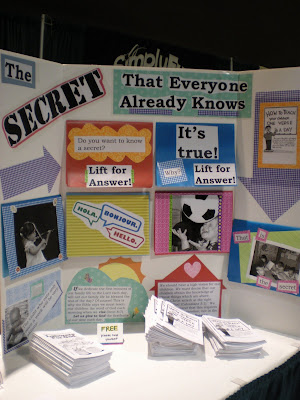 This year, we had re-done our two big display boards, and Ben made a custom plywood case to store them in, so they wouldn't get banged up. We used clear contact paper on the displays, which seemed like a good thing to do. The one above has lift-up flaps, and we were pleased to see they are getting bent up with use! 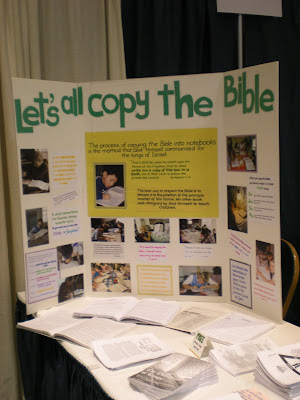 The table set up went really quick, so we found a nearby Sam's Club and did some grocery shopping and beverage drinking. We were unaccustomed to the heat, though when we lived in deep south Texas, it was not that big of a deal. From Sam's Club, we went to Walmart. From Walmart, we went to Goodwill. And then, to pick up Dave in downtown St Louis again.

After a hot night (for the boys and Daddy in the bus) we got ready for the conference and out the door (or should I say in the door -- of the bus?) and on the way. Lately, we had been having mysterious bus konking out experiences. That mornning, the bus did konk out once, but it started right up and we made it in plenty of time.

Visiting with Missourinians at our table was very nice, and we were pleased that people took lots of our free literature. Several had been to our website in advance, and were familiar with some of the articles. Over the two days of the conference, at least four families told us they planned to begin copying the Bible. It was neat to see one family look at the Bible copy display, as the dad read the text outloud and added his comments. There were LOTS of fathers at this conference, praise the Lord!

We had nice "neighbors" at nearby locations. We also enjoyed chatting with some of the vendors elsewhere.

A couple of the homeschool group leaders which we had emailed prior to the conference greeted us, and offered realtor recommendations. With nothing to lose, we asked one new acquantance if they happened to know a diesel mechanic. Yep! Believe it or not, we had a homeschooling mobile diesel mechanic come and look at the bus while we were at the conference. He recommended a new fuel filter, and got the parts for us.

There were lots of sessions at the conference, and we had full attendance privilidges. Of course wanted to see the Answers In Genesis representative, Dr. Tommy Mitchell, whom we hadn't heard before. As we went to the room for his session, we found that the previous speaker was over time, and Dr. Mitchell was waiting along with us outside, feeling rushed to set up his projector in time for his talk which followed. Zak offered to help him with his setup, and he happily accepted. That was fun for Zak. 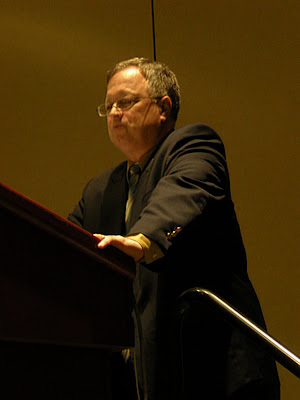 Dr Mitchell has a southern accent and is a very enjoyable speaker. He also drives a Mac! When Dave later realized he had left his Mac charger at his office and that Dr. Mitchell had a Mac, he asked Dr Mitchell if he could borrow his charger. He graciously agreed, which was a blessing. Dave had some catch-up writing to do. 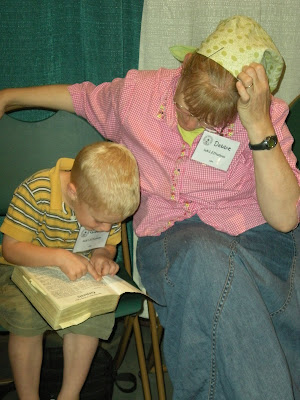 In between sessions and visiting people at our table, what to do? Why not homeschool? Or is that homeschoolconferenceschool? Gideon learned to read the word "God". He is already familiar with G, as it's his inital. He just looked for all the instances of "God" on the first page of Genesis -- fun! 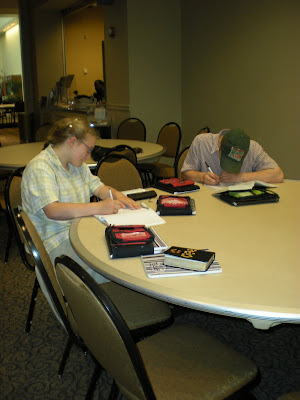 We managed to bring about everyone's Bible copy stuff, which was packed in a rolling suitcase. So, the kids did a little of that near a table where Dave was working. 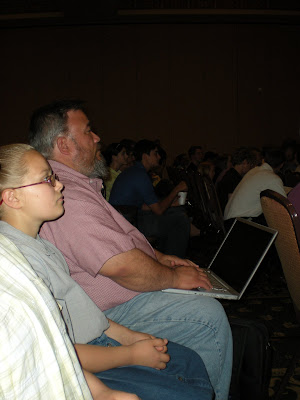 Don't tell Mr. Bauchman! Yes, Dave brought his computer to Voddie Bauchman's excellent talk, but was pretty captivated by this neat brother, and didn't get much done. Our family really enjoyed hearing his messages. He said a lot of familiar (to us) things which we haven't heard anywhere else! We especially liked his message "Children of Caesar", where he brought out the important point that christians should not be copying the world's methods of teaching their children - "school" at home. When he mentioned that his kids, when asked what grade they are in, just shrug their shoulders, many Kleins smiled and definately could relate!

At the end of day one of the conference, we arrived at the bus, took roll, and then realized Mommy's purse, with the key to the air conditioned cabin, was left behind in the last keynote! It looked like they were locking up for the night, but Solomon dashed back and was able to get to the room and locate the purse, safe and sound, praise the Lord! We weren't really sweating about my wallet, but we were hoping that the key to the air conditioned cabin could be located! Phew!

As we drove back to the campground that night, the bus started stopping. It happened repeatedly, and sometimes it would not immediately start up. The fuel filter was not the problem. Since we did not want to miss the last day of the conference, we felt we'd just have to try to get there instead of tracking down a diesel shop.

And we did make it to the conference the next day, though we stopped several times and were late as a result. But, we were very thankful to arrive at the air conditioned conference center and promptly forgot about the problem for the day.

We had a full day of visiting at the table, attending a few of the many sessions, and shopping, not to mention doing the cool escalators several dozen times. But by mid-afternoon, it was time to close the vendor hall. 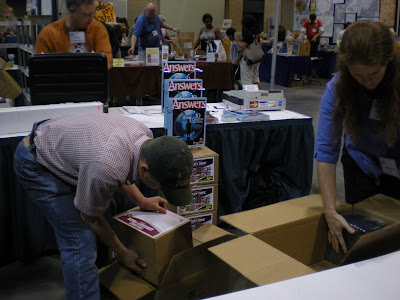 The big kids offered to help Dr. Mitchell and his sweet wife with packing up the Answers in Genesis booth. It was huge! We have actually been able to help AiG at several conferences, and have learned that just offering to help is a great way to get to visit with the speakers. Dr. Mitchell told us the interesting tidbit that just about all AiG speakers use Macs except Dr. Lisle. For what it's worth...

That evening, after a very much enjoyed meal at an air conditioned Jack in The Box (with memories of happy times in Texas), we headed back to the campground through a construction area, unexpectedly coming to a dead end, and unexpectedly being stopped by a police officer. Well, more accurately, we stopped first, preparing for a doozie of a Y turn, and the officer was curious and stopped behind us.

After giving the officer the old line about how we were just leaving a homeschool conference, Dave accidentally handed him our expired RV registration. The officer was not impressed and started questioning us, but then we located our CURRENT RV registration (why do I save the old ones?) and he became much friendlier and sent us on our way. Phew!

The next morning, we had planned to drop Dave off at his office, but he decided he could not let us drop him off at work until the bus was fixed. So we found a nearby diesel shop, and they kindly told us to come in as soon as we could and they'd get right to us! Wow, that doesn't happen often! 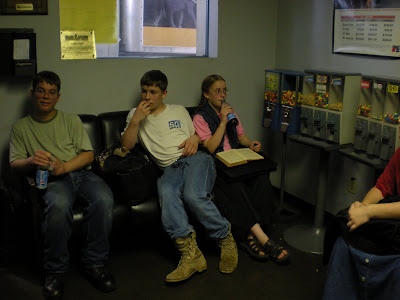 We have learned that most diesel shops don't have waiting rooms large enough for us all. But we kind of felt that it would not take long, as they truly took us in right away. 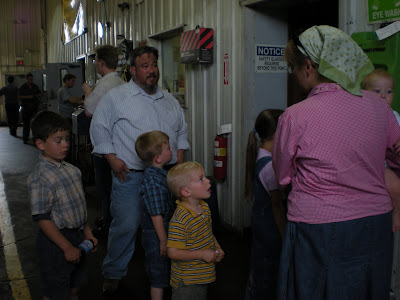 They actually let us just sit by the bus and watch, as they hooked up the computer analyzer stuff and out came the result:

cam shaft position sensor
They were fully surprised when we let out some sighs and demonstrated we were pretty familiar with this $20 piece of equipment. The boys had just replaced this part last summer...after having the same konk out symptoms...and changing the fuel filter. Duh! (whoops!) Apparently, the part they used was defective, because it was supposed to be another 100K before it randomly started konking out the motor. 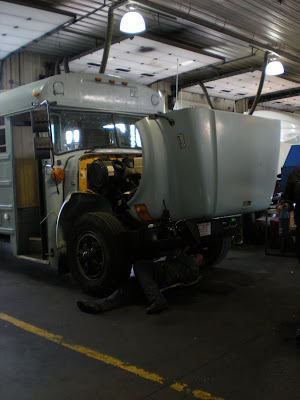 Well, that was a done-in-record-time repair, and we were on our way out, dropping off Dave and looking for an air conditioned place to look for possible houses in St Louis!

The house shopping was slowed down by our learning that St Louis County, in which St Louis is located, is subject to occupancy laws. Most of the municipalities require no more than two children per bedroom. Since we were interested in houses closest to Dave's office, it threw us for a loop....all 15 of us. It seems pretty strange, but apparently, that's how it is in St Louis county.

So, we had to broaden our search. We did find one house in particular which looked really good and was just over the county line. We went by twice, took photos, and then learned it was in escrow. So it was not the house God picked out for us.

We decided to leave for Wisconsin in the early evening. Dave's boss picked him up from the RV campground for the weekly company breakfast, so we stayed and cleaned up our cabin and prepared for departure. 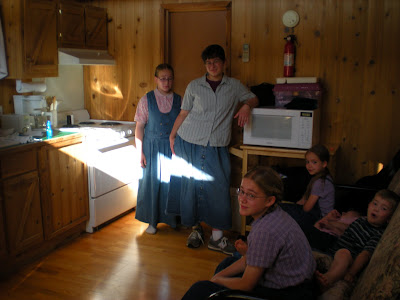 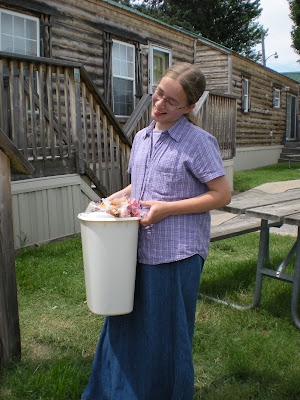 After everyone got showered, we packed our clean laundry, cleaned out the bus, cleaned under the bus (oil), and got situated in our seats. We also checked out one of the houses we were looking at one last time. Finally, in the early evening, we rolled into St Louis to pick up Dave ... not knowing it was the night of a Cardinals game! Wow! 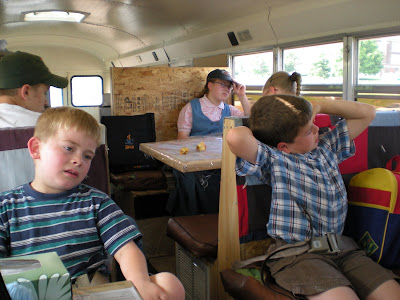 It remained pretty warm in the bus until we got Dave, snaked our way out of the Cardinal zone, and started rolling down the interstate. As the sun sank lower in the sky, and it cooled off, we sat back and relaxed on the 7 hour drive. Having the motor not spontaneously shut off was still a novelty and we sure enjoyed it. 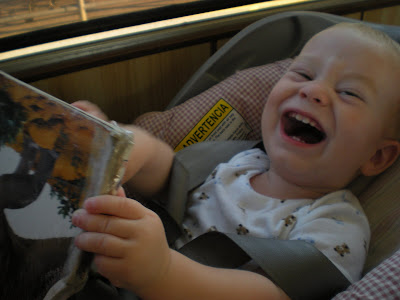 Joshie is always a happy traveler!

We have already gotten some nice communication from several homeschoolers in Missouri who stopped by our table. The conference was another big blessing!
Posted by Debbie at 9:12 PM