The law of the LORD is perfect!

Our family went verse by verse through Psalm 119 for over a year, with the goal of memorizing it. We do well when we recite it all together, helping each other. We don't consider it a done deal; we try to regularly review it (portions of it). It's the biggest "chapter" in the Bible!

The little boys are probably the ones with most of it best memorized. Little children memorize so easily. We think its not a coincidence!

Today, for our school time with the little boys, we worked through reviewing it. Noah led the charge by reading it, and me and the mostly illiterate (Sammy and Gideon) try to say it by memory along with him. 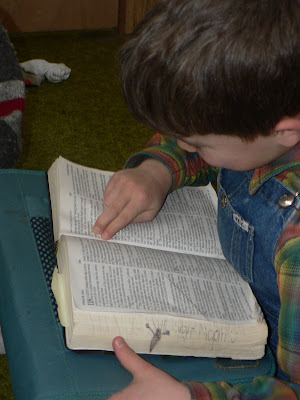 The next part is a little tricky for me to introduce. We started doing some things to better understand Psalm 119. That is our primary goal in teaching the children, understanding God's Word.

Reading through this Psalm, you notice the repetition of various synonyms for "law." So it seemed natural to talk about this, and why....

Why do we keep reading different words that are similar to law?
Just this morning, when it was 5 below zero, Bekah was out feeding the ducks. She accidentally dumped a bucket of water on our front steps. It turned to smooth ice. It was very treacherous, because if someone dashed out to take out the trash -- ouch! So I immediately assembled everyone and told them:

There's ice on the steps. It's dangerous. You have to be careful. It's slippery. The ice will not melt in this cold. If you step on the ice, you will slip and fall. Don't forget about the ice on the steps!
That was my attempt to get everyone to pay attention, because if just one person forgets, they will probably get badly hurt.

Well, it looks like the LORD was doing the same thing in Psalm 119: remember the law or you will be in trouble!

We had already started talking about synonyms last time and began making a list of the ones we found (don't know if you should list law on a list of synonyms for law, but oh well!).

After going through the first three sections of Psalm 119, we found six words similar to law ("statutes" is not visible).

As we hunted, Noah would occasionally find words like "declare" or "rejoice" and ask if they were synonyms. So we discussed the difference between action words and nouns (specifically, synonyms for law, which is a noun). We don't test the kids for things like this, but since it is helpful to know about words like this, that is why we looked at it. (Learning the definition of the word synonym is not a big deal to us, and isn't helpful in understanding what a synonym is, but we did that too.)

Then I remembered some math sheets we had, which were used for a math activity. In the activity, you interview family members to see what their favorite color, food, etc is. The child picks a color for each choice, and counts up the colored cubes representing the votes of the family members. Then they graph the results. So I dug the sheets out and modified them to accommodate our needs.

We wrote each synonym under the baseline, assigned each a different color. 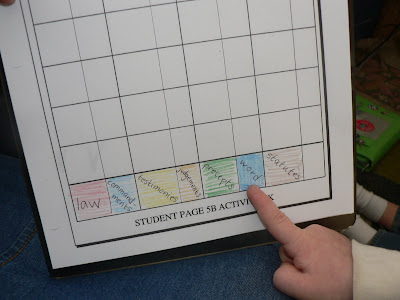 Noah and Sammy transferred the colors to each sheet. 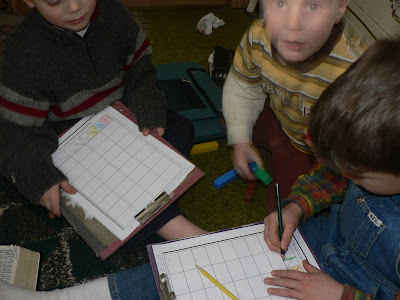 Then, as Noah read through Psalm 119, he would pause whenever he came to one of the synonyms (which we already had listed). Sammy and Giddy would take turns identifying the word on the sheet (so they could figure out which color cube to get) and then selecting the cube and putting it in a pile. 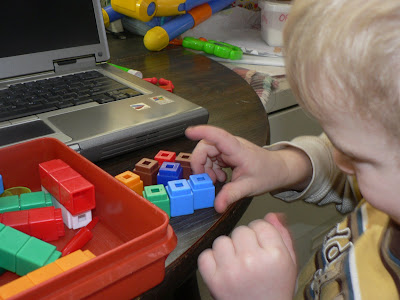 It worked out really well, as Giddy practiced his colors, and Sammy practiced identifying the words (mostly by the first letter sounds, which happened to all be unique). They had to wait for turns and they all listened attentively, because they knew what we were looking for.

What is interesting is that it gave me another opportunity to observe Sammy's skills in letter recognition and letter sounds and things like that. He is really learning. It really seems like scripture memory adds such a important dynamic to learning to read. Its hard to explain. He is honestly sounding out the words. He is not just mindlessly saying words that start with the same letter, as our older kids would do when we used regular phonics programs. Sammy knows what the word is supposed to be, so he works with the letters there to make it right.

For example, he asked "Is the p silent in Psalm? Because its supposed to say salm"

This explains what we observed with some of our middle girls. They learned about 4 letter sounds, and then it just seemed, bang! they were reading. Well, what was also happening was they were following along in in the Bible and in hymnals (which we use almost daily at home). Duh!

So we amassed a certain number of colored cubes. Then came the fun task of forming them into various sized rods. Then, they began to work on coloring in the appropriate number of squares in their appropriate columns... 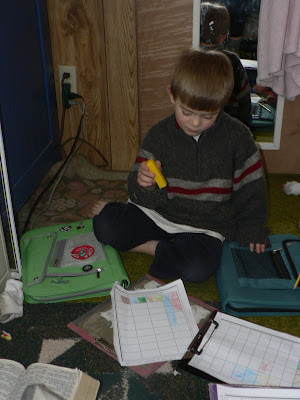 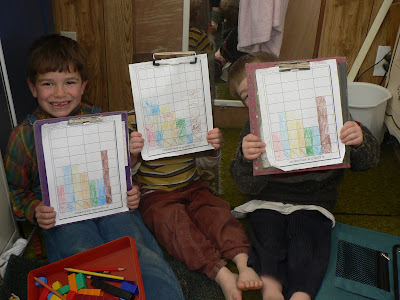 Labels: homeschool, little ones and the Bible